Why should you pay attention in school?

Eleven-year-old Tilly Smith and her family were walking along the beach in Phuket, Thailand, on December 26, 2004. Tilly noticed that the sea was bubbling. She thought this was like a video she'd seen in geography class two weeks earlier. The English schoolgirl insisted to her parents that a tsunami was coming. Her warning saved the approximately 100 tourists and civilians who were on that beach.

Earthquakes can cause tsunamis. These deadly ocean waves may result from any shock to ocean water. A shock could be a meteorite impact, landslide, or a nuclear explosion. But most come from large underwater earthquakes.

An underwater earthquake creates a tsunami this way: the movement of the crust displaces water. The displacement forms a set of waves. The waves travel at jet speed through the ocean. Since the waves have low amplitudes and long wavelengths, they are unnoticed in deep water. As the waves reach shore they compress. They are also pushed upward by the shore. For these reasons, tsunamis can grow to enormous wave heights. Tsunami waves can cause tremendous destruction and loss of life. Fortunately, few undersea earthquakes generate tsunamis.

The Boxing Day Tsunami struck on December 26, 2004. The tsunami was caused by one of the largest earthquakes ever recorded. The Indian Ocean Earthquake registered magnitude 9.1. The quake struck near Sumatra, Indonesia, where the Indian plate is subducting beneath the Burma plate. It released about 550 million times the energy of the atomic bomb dropped on Hiroshima.

Several tsunami waves were created. The waves went around the Indian Ocean and struck eight countries (Figure below). 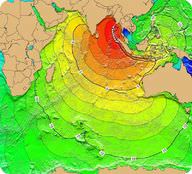 Travel time map for the Boxing Day Tsunami (in hours). Countries near red, orange, and yellow areas were affected the most.

About 230,000 people died. More than 1.2 million people lost their homes. Many more lost their way of making a living. Fishermen lost their boats, and businesspeople lost their restaurants and shops. Many marine animals washed onshore, including dolphins, turtles, and sharks.

Japan received a one-two punch in March 2011. The 2011 Tōhoku earthquake offshore was a magnitude 9.0, and damage from the quake was extensive. The earthquake generated massive tsunami waves which hit the island nation. Waves in some regions topped 9 meters (27 feet).

The tsunami did much more damage than the massive earthquake. In the photo of Sendai (Figure below), the black smoke is coming from an oil refinery. The refinery was set on fire due to the earthquake. The tsunami prevented efforts to extinguish the fire for several days.

An aerial view shows the damage to Sendai, Japan caused by the earthquake and tsunami.

Worst of all was the damage done to nuclear power plants along the northeastern coast. Eleven reactors were automatically shut down. Power and backup power were lost at the Fukushima plant. This lead to equipment failures, meltdowns, and the release of radioactive materials. Cleanup of the disabled plants will go on for many years.

This sign is part of the tsunami warning system used in communities around the Pacific Ocean since 1948.

As in Japan, warning systems aren’t always helpful. People in communities very close to the earthquake do not have enough time to move out of the area. Farther away from the quake, evacuation of low-lying areas saves lives.