Is earthquake magnitude the most important factor in determining damage?

We know that earthquakes can kill lots of people. However, the ground shaking alone almost never kills people. Unlike in cartoons, the ground does not swallow people up! Deaths depend somewhat on an earthquake's size and the type of ground people inhabit. But a very important factor is the quality of the structures. People are killed when structures fall on them. More damage is done and more people are killed by the fires that follow an earthquake. Of course, the number of deaths is different from the property damage that a quake does.

What makes an earthquake deadly?

A landslide in a neighborhood in Anchorage, Alaska, after the 1964 Great Alaska earthquake.

Liquefaction of sediments in Mexico City caused the collapse of many buildings in the 1985 earthquake.

In earthquake-prone areas, city planners try to reduce hazards. They look at both the likelihood of a quake and the damage one would do. For example, in the San Francisco Bay Area, maps show how much shaking is expected for different ground types (Figure below). This allows planners to locate new hospitals and schools more safely. 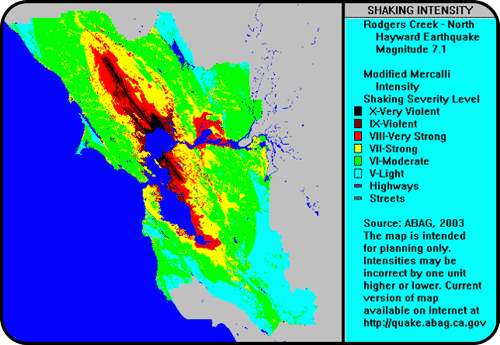 The expected Modified Mercalli Intensity Scale for an earthquake of magnitude 7.1 on the northern portion of the Hayward Fault.