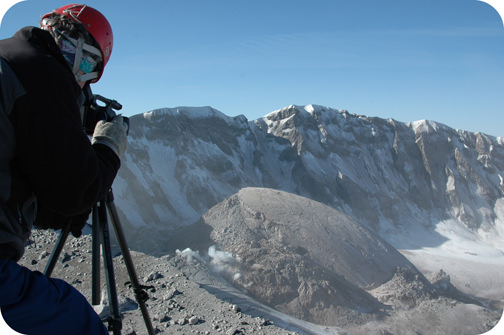 Climbing up Mount St. Helens and looking into the crater at the steaming dome is an incredible experience. The slope is steep and the landscape is like something from another planet. Nothing's alive up there, except maybe a bird. When you're standing on the top, you can see other Cascades volcanoes: Mts. Adams, Rainier, Hood, Jefferson, and sometimes more.

A volcano is a vent through which molten rock and gas escape from a magma chamber. Volcanoes differ in many features, such as height, shape, and slope steepness. Some volcanoes are tall cones, while others are just cracks in the ground (Figure below). As you might expect, the shape of a volcano is related to the composition of its magma. The three types of volcanoes are composite, shield, and cinder cones.

Figure above shows Mt. Fuji, a classic example of a composite volcano. Composite volcanoes have broad bases and steep sides. These volcanoes usually have a large crater at the top. The crater was created during the volcano's last eruption.

Composite volcanoes are also called stratovolcanoes. This is because they are formed by alternating layers (strata) of magma and ash (Figure below). The magma that creates composite volcanoes tends to be thick. The steep sides form because the lava cannot flow too far from the vent. The thick magma may also create explosive eruptions. Ash and pyroclasts erupt into the air. Much of this material falls back down near the vent. This creates the steep sides of stratovolcanoes. The composition of magma that erupts at composite volcanoes is usually felsic (rhyolite) or intermediate (andesite).

A cross section of a composite volcano reveals alternating layers of rock and ash. Frequently there is a large crater at the top from the last eruption.

Composite volcanoes are common along convergent plate boundaries. When a tectonic plate subducts, it melts. This creates the thick magma needed for these eruptions. The Pacific Ring of Fire is dotted by composite volcanoes.

Shield volcanoes look like a huge ancient warrior’s shield laid down. Pictured above is Mauna Kea Volcano (Figure above) taken from Mauna Loa Volcano. Both volcanoes are part of the Big Island of Hawaii. A shield volcano has a very wide base. It is much flatter on the top than a composite volcano. The lava that creates shield volcanoes is relatively thin. The thin lava spreads out. This builds a large, flat volcano, layer by layer. The composition of lava at shield volcanoes is mafic. Shield volcanoes are very large. For example, the Mauna Loa Volcano has a diameter of more than 112 kilometers (70 miles). The volcano forms a significant part of the island of Hawaii. The top of nearby Mauna Kea Volcano is more than ten kilometers (6 miles) from its base on the seafloor.

Cinder cones usually build up very rapidly. They erupt only for a short time. Many produce only one eruption. For this reason, cinder cones do not reach the sizes of stratovolcanoes or shield volcanoes (Figure below).