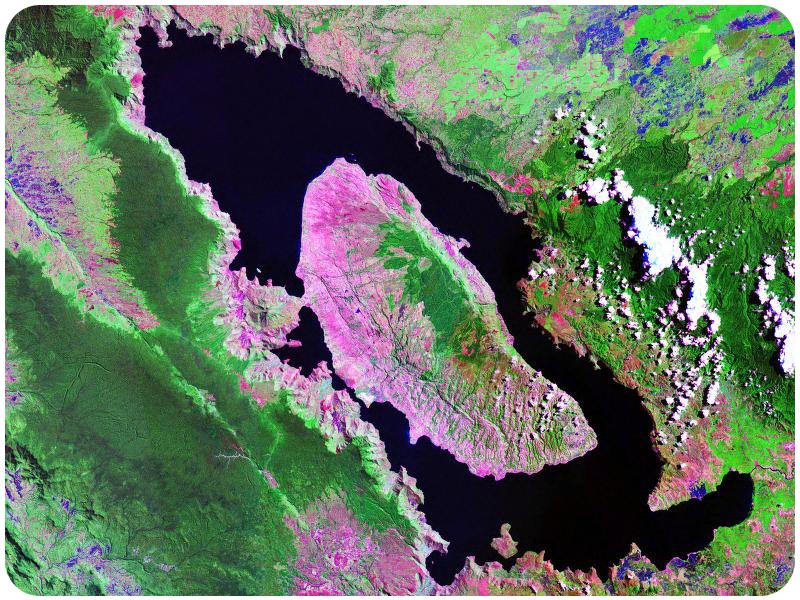 Is this a supervolcano?

Lake Toba in Indonesia is 100 km (62 mi) by 30 km (19 mi). The water fills a giant caldera created by a supervolcano. The eruption took place about 75,000 years ago, Earth's largest eruption in the past 25 million years. So much material was ejected into space that there was a 6- to 10-year volcanic winter. Some scientists think that only 10,000 humans survived worldwide. The numbers of other mammals also plummeted.

During a massive eruption, all of the material in a magma chamber may be ejected. Without support, the mountain above the empty chamber may collapse. This produces a huge caldera. Calderas are generally round, bowl-shaped formations (Figure below).

Crater Lake, Oregon is the remnant of Mount Mazama. After an enormous eruption the mountain collapsed, forming a caldera. Crater Lake should actually be named Caldera Lake. Wizard Island, within the lake, is a cinder cone.

Supervolcano eruptions are extremely rare in Earth's history. It’s a good thing, because they are unimaginably large. To be considered a supervolcano, a volcano must erupt more than 1,000 cubic km (240 cubic miles) of material. Imagine how large that is compared with 1.2 km3 for Mount St. Helens. Mount Pinatubo, which erupted in the Philippines in 1991, ejected only 25 km3 of material. Not surprisingly, supervolcanoes are the most dangerous type of volcano.

The exact cause of supervolcano eruptions is still debated. However, scientists think that a very large magma chamber erupts entirely in one catastrophic explosion. This creates a caldera into which the surface collapses (Figure below). The composition of the eruption is felsic or highly felsic. 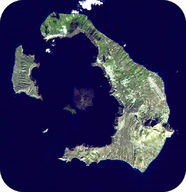 The caldera at Santorini in Greece is so large that it can be seen only by satellite.

The largest supervolcano in North America is beneath Yellowstone National Park in Wyoming. Much of the national park lies within the enormous Yellowstone Caldera. It is so large that you can stand on one rim and not see the other side. 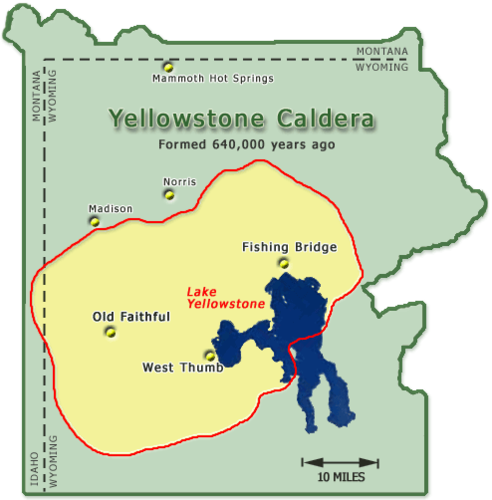 What would cause such a giant caldera?

Yellowstone sits above a hotspot that has erupted catastrophically three times: 2.1 million, 1.3 million, and 640,000 years ago. Yellowstone has produced many smaller (but still enormous) eruptions more recently (Figure below). Fortunately, current activity at Yellowstone is limited to the region’s famous geysers. No one knows when the supervolcano will erupt again. 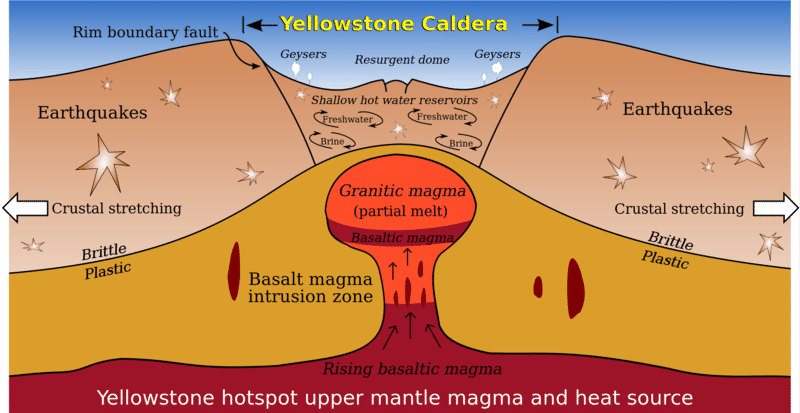 Supervolcano Eruptions and Life on Earth

A supervolcano could change life on Earth as we know it. Ash could block sunlight so much that photosynthesis would be reduced and global temperatures would plummet. Volcanic eruptions could have contributed to some of the mass extinctions in our planet’s history. No one knows when the next super eruption will be.