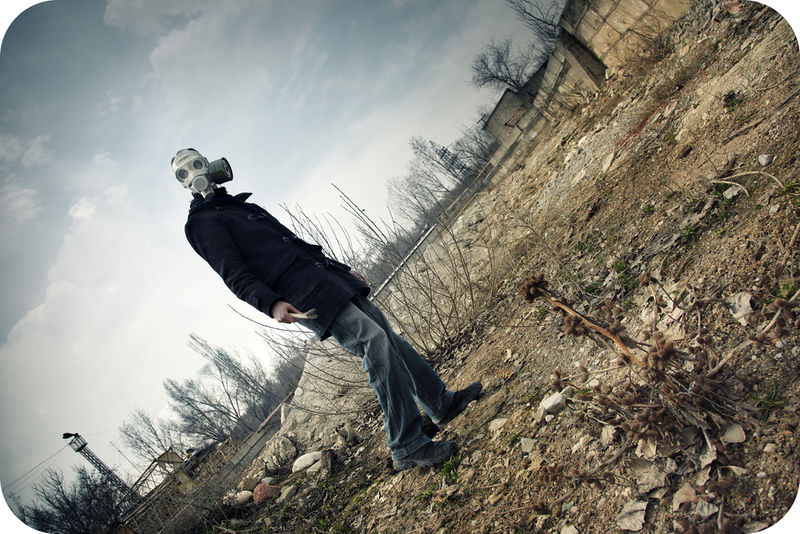 Why do we treat the atmosphere like a dump?

On a smoggy day, you're breathing garbage. Many human activities dump trash into the air. The trash is gases and particles, but it's still trash. Would we tolerate all this trash if it were in our houses?

Air pollution is harmful to human beings and other living things. About 22 million people die from air pollution each year. Breathing polluted air increases the risk of developing lung diseases, such as asthma and lung cancer. Breathing bad air also increases the chances of dying from other diseases. Children are most likely to be affected by air pollution. That’s because their lungs are still developing and growing. Children also take in more air for their size than adults do. Some air pollutants damage the environment as well as the health of living things. The type of damage depends on the pollutant. Air pollution can also harm the environment.

This concept explores the effects of different pollutants on the environment and human health. The pollutants include particulates, ozone, nitrogen oxides, sulfur oxides, carbon monoxide, heavy metals, and VOCs.

Particulates cause lung diseases. They can also increase the risk of heart disease and the number of asthma attacks. Particulates block sunlight from reaching Earth’s surface. This means there is less energy for photosynthesis. Less photosynthesis means that plants and phytoplankton produce less food. This affects whole ecosystems.

The ozone in smog may damage plants. The effects of ozone add up over time. Plants such as trees, which normally live a long time, are most affected. Entire forests may die out if ozone levels are very high. Other plants, including crop plants, may also be damaged by ozone. Below, you can see evidence of ozone damage (Figure below).

The ozone in smog is also harmful to human health. The image below shows the levels of ozone to watch out for (Figure below). Some people are especially sensitive to ozone. They can be harmed by levels of ozone that would not affect most other people. These people include those with lung or heart problems. 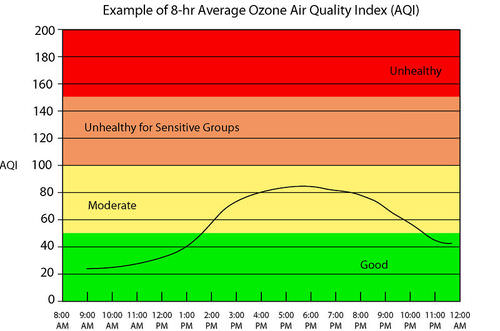 Carbon monoxide (CO) is toxic to both plants and animals. CO is deadly to people in a confined space, such as a closed home. Carbon monoxide is odorless and colorless, so people can’t tell when they are breathing it. That’s why homes should have carbon monoxide detectors. 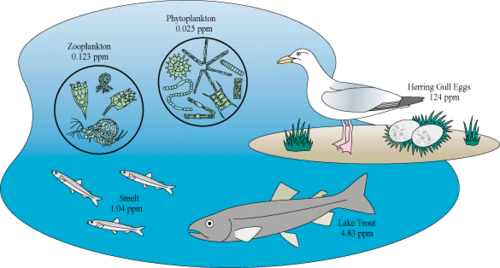 This diagram shows how mercury bioaccumulates. Compare the parts per million (ppm) of mercury in phytoplankton and gull eggs. Can you explain the difference?

The higher up a food chain that humans eat, the greater the levels of toxic metals they take in. That’s why people should avoid eating too much large fish, such as tuna. Tuna are predators near the top of their food chains. They have been shown to contain high levels of mercury. In people, heavy metals can damage the brain and other organs. Unborn babies and young children are most affected. That’s because their organs are still developing.

VOCs are toxic to humans and other living things. In people, they can cause a wide range of problems. These can range from eye and nose irritation to brain damage and cancer. Levels of VOCs are often higher indoors than out. That’s because they are released by products such as paints, cleaning solutions, and building materials. How might you reduce your exposure to VOCs?