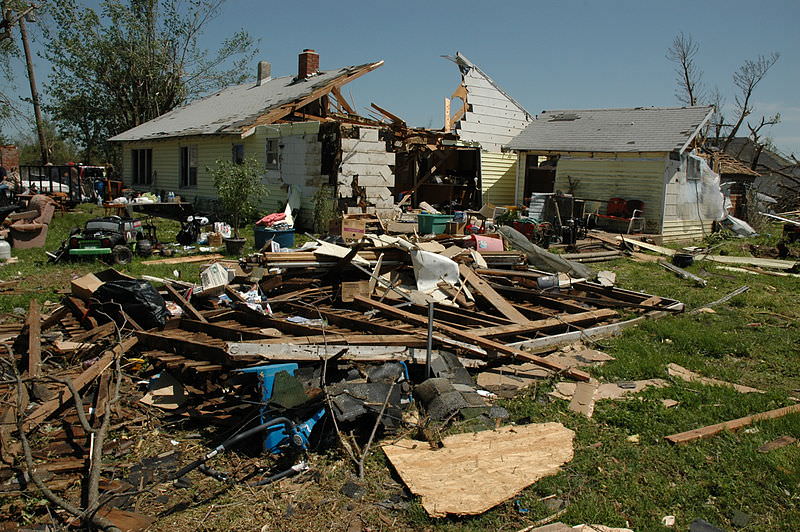 Where do you go to see a tornado? Tornado Alley!

Tornadoes are deadly serious. The deadliest in recent years killed 158 people in Joplin, Missouri in 2011. More than 550 people died in the United States from tornadoes that year. The deadliest tornado on record killed 629 people in 1926. This "tri-state" tornado raced across Missouri, Illinois, and Indiana.

Severe thunderstorms have a lot of energy and strong winds. This allows them to produce tornadoes. A tornado (Figure below) is a funnel-shaped cloud of strong whirling winds. The funnel moves along the ground, destroying everything in its path. As it moves, it loses energy. Before this happens, it may have gone up to 25 kilometers (16 miles). Fortunately, tornadoes are narrow. They may be only 150 meters (500 feet) wide. Tornadoes are also called twisters. 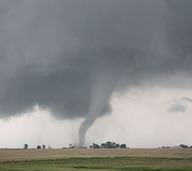 Tornadoes are small but mighty storms.

The winds of a tornado can reach very high speeds. The faster the winds blow, the greater the damage they cause. Wind speed and damage are used to classify tornadoes (Table below). 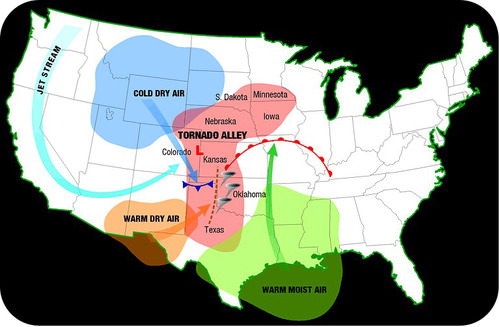 Tornadoes are most common in the central part of the U.S.

A tornado strikes only a small area, but it can still destroy everything in its path. Most injuries and deaths from tornadoes are caused by flying debris (Figure below). In the United States, an average of 90 people are killed by tornadoes each year. The most violent two percent of tornadoes account for 70% of the deaths by tornadoes. 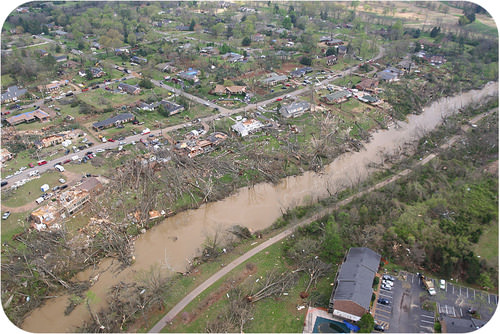 Tornado damage that occurred in the City of Murfreesboro, TN when it was struck by an F-4 tornado.

Late April 2011 saw the deadliest set of tornadoes in more than 25 years. There were more than 150 tornadoes reported throughout one day! Severe thunderstorms came about when two very different air masses met. A warm moist air mass blew north from the Atlantic Ocean and Gulf of Mexico (mT). It rammed into a cold polar air mass (cP) that the was sitting over the region. In addition, the jet stream was blowing strongly in from the west (Figure below). 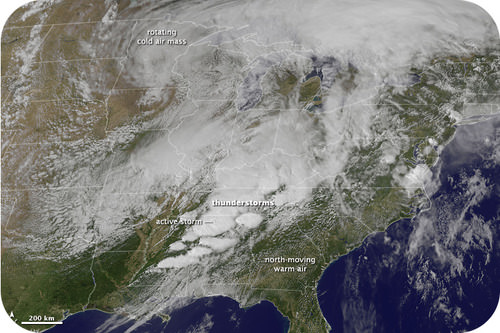 Everyone in the region was told that tornadoes were possible. But it's impossible to know exactly where and when a tornado will touch down. The path it will take is unknown, because tornado movement is not very predictable.