Is latitude making the difference in weather in these three cities?

No. These three cities are at the same latitude. They are San Francisco, California; Wichita, Kansas; and Virginia Beach, Virginia. Proximity to the ocean is important. Also important is the direction the winds are blowing at this location.

When a place is near an ocean, the water can have a big effect on the climate.

Places at the same latitude may have very different climates if one is on a coast and one is inland.

The Influence of the Ocean

The ocean has a big effect on climate. This is obvious when you compare the temperatures of these three cities. Each of these cities is located at 37°N latitude, within the westerly winds (Figure below). 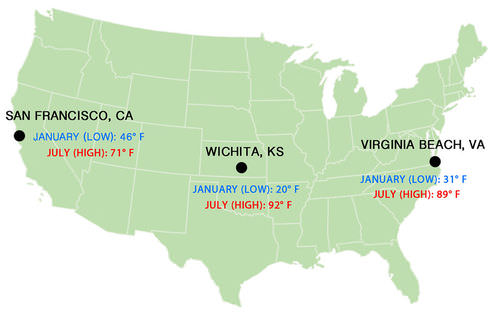 How does the ocean influence the climate of these three cities?

Ocean currents carry warm or cold water throughout the world’s oceans. They help to even out the temperatures in the oceans. This also affects the temperature of the atmosphere and the climate around the world. Currents that are near shore have a direct impact on climate. They may make the climate much colder or warmer. Examples of this are pictured below (Figure below). 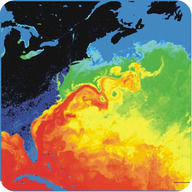 The Gulf Stream moves warm equatorial water up the western Pacific and into northern Europe. The warm water raises temperatures in the British Isles.