How are these two soils different?

How well soil forms and what type of soil forms depends on several different factors, which are described below.

Climate is the most important factor determining soil type. Given enough time, a climate will produce a particular type of soil. The original rock type does not matter. Two rocks of the same type will form a different soil type in each different climate. This is true because most rocks on Earth are made of the same eight elements. When the rock breaks down to become soil, the soil is the same.

Soil type also influences the type of vegetation that can grow in the region. We can identify climate types by the types of plants that grow there.

The original rock is the source of the inorganic portion of the soil. Mechanical weathering breaks rock into smaller pieces. Chemical reactions change the rock's minerals.

Soil may form in place or from material that has been moved.

Weathered material washes off steep slopes and so does not stay in place to form soil. Soil forms where land areas are flat or gently undulating.

Biological activity produces the organic material in soil. Humus forms from the remains of plants and animals. It is an extremely important part of the soil. Humus coats the mineral grains. It binds them together into clumps that hold the soil together. This gives the soil its structure. Soils with high humus are better able to hold water. Soils rich with organic materials hold nutrients better and are more fertile. These soils are more easily farmed.

The color of soil indicates its fertility. Black or dark brown soils are rich in nitrogen and contain a high percentage of organic materials. Soils that are nitrogen poor and low in organic material might be gray, yellow, or red (Figure below). Soil with low organic material is not good for growing plants. 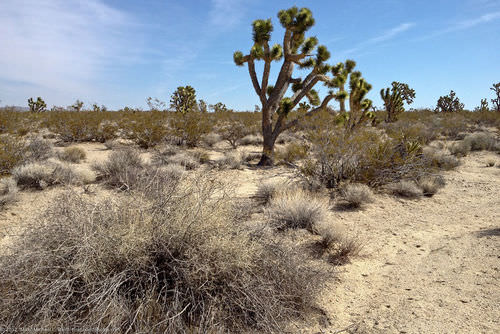 This sandy soil shows evidence of very little organic activity. Plants grow, but are far apart and short-lived. This means that little soil can form. The soil that's there has little organic content.

Use the resource below (start at 0:50) to answer the questions that follow.