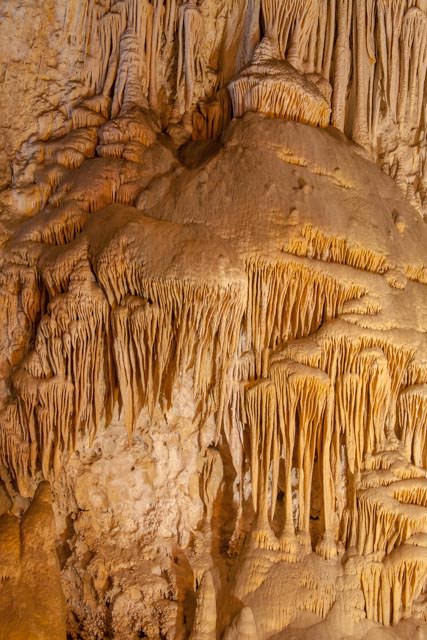 Where would you look for a spectacular cave like this one?

Groundwater dissolves minerals and rocks into ions. Groundwater deposits those ions into different types of structures. Limestone caves are the best place to see these structures. Water erodes the cave, and the deposits form structures like stalactites and stalagmites. The cave pictured here is Carlsbad Caverns in New Mexico.

Caves are known for their spectacular mineral structures. Caves are likely to be found in limestone where the groundwater level has gone down. This exposes the cave and its features. Stalactites are beautiful icicle-like formations. They form as water containing calcium carbonate drips from the ceiling of a cave. The word "stalactite" has a "c," and it forms from the ceiling. Stalagmites form as calcium carbonate drips from the ceiling to the floor of a cave. The stalagmite grow upward. The "g" in "stalagmite" means it forms on the ground. You can see examples of both stalactites and stalagmites below (Figure below).

Stalactites hang from the ceiling and stalagmites rise from the floor of a cave. The two together form a column.

If a stalactite and stalagmite join together, they form a column. One of the wonders of visiting a cave is to witness the beauty of these amazing and strangely captivating structures.

Some of the largest, and most beautiful, natural crystals can be found in the Naica mine, in Mexico. These gypsum crystals were formed over thousands of years. Groundwater that is rich in calcium and sulfur flowed through an underground cave. Check it out: