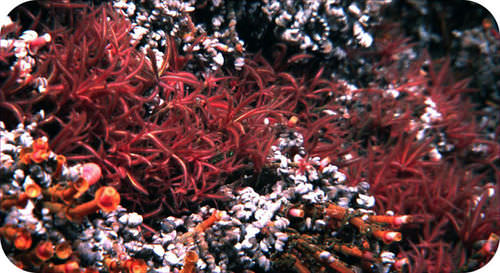 What's the most unusual life form you could see on Earth?

Some people might disagree. But the most unusual life on Earth could be the strange organisms that live at hydrothermal vents at mid-ocean ridges. These organisms break down chemicals to make food energy. They engage in chemosynthesis. Would you like to see an ecosystem with chemosynthesis at its base?

Pictured below is a marine food chain (Figure below). Phytoplankton form the base of the food chain. Phytoplankton are the most important primary producers in the ocean. They use sunlight and nutrients to make food by photosynthesis. Small zooplankton consume phytoplankton. Larger organisms eat the small zooplankton. Larger predators eat these consumers. In an unusual relationship, some enormous whales depend on plankton for their food. They filter tremendous amounts of these tiny creatures out of the water.

The bacteria that make food from chemicals are also primary producers. These organisms do not do photosynthesis since there is no light at the vents. They do something called chemosynthesis. They break down chemicals to make food.

When marine organisms die, decomposers break them down. This returns their nutrients to the water. The nutrients can be used again to make food. Decomposers in the oceans include bacteria and worms. Many live on the ocean floor. Do you know why?