What would a field trip into the ocean reveal?

There are all sorts of incredible life forms in the seas! Most live near the surface or come up to the surface. Some live very far below the surface and never come up. All are well adapted to their watery environment.

Organisms in a tide pool include a sea star and a sea urchin.

Many animals in the intertidal live in tide pools. What specific adaptations do they have to that zone? The mussels on the top left have hard shells. These protect them from waves and from drying out. The sea anemones in the lower right are more often submerged. They can close up during low tides. Both types of organisms have strong attachments so they don't wash out to sea.

Many young organisms get their start in estuaries and so they must be adapted to rapid shifts in salinity.

Corals and other animals create limestone rock reefs near the shore. Coral reefs are the “rainforests of the oceans.” They have a tremendous amount of species diversity (Figure below).

In this image of Maupiti Island in the South Pacific, the remnants of the volcano are surrounded by the circular reef.

Eventually, all that is left is a reef island called an atoll. A lagoon is found inside the reef.

The open ocean is a vast area. Food washes down from the land. Food is also created by photosynthesizing plankton. Zooplankton and larger animals feed on the phytoplankton and on each other. Larger animals such as whales and giant groupers may live their entire lives in the open water.

In the deepest ocean, survival is almost impossible (Figure below). It’s very rare to find a meal, so the fish there use very little energy. They are very small. The fish move very little and breathe slowly. Missing a meal could be deadly, so the fish have interesting ways of getting and keeping food. Some species have jaws that unhinge to accept a larger fish. Some have backward-folding teeth to keep prey from escaping.

An 1896 drawing of a deep sea angler fish with a bioluminescent “lure” to attract prey.

Hydrothermal vents are among the most unusual ecosystems on Earth. They are located at mid-ocean ridges where water is extremely hot. The food source for these ecosystems is chemosynthesis (Figure below). This ecosystem is entirely separate from the photosynthesis at the surface. Shrimp, clams, fish, and giant tube worms have been found in these extreme places. 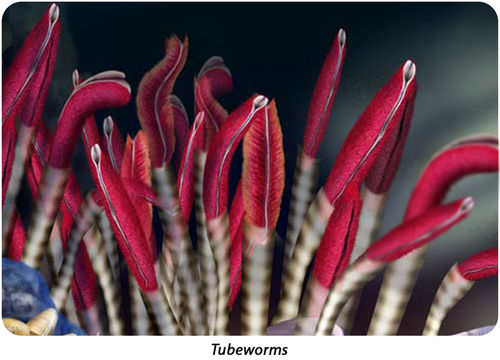 Giant tube worms are found at hydrothermal vents. They get food from the chemosynthetic bacteria that live within them. The bacteria provide food; the worms provide shelter.