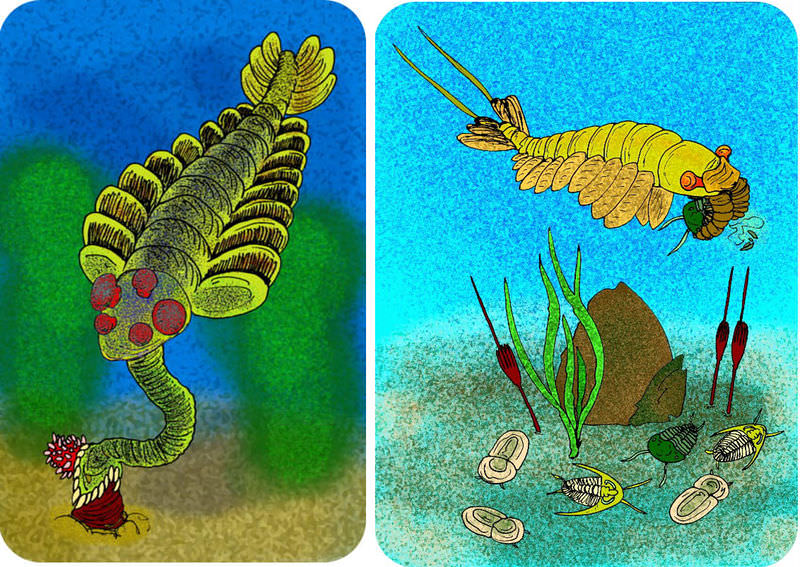 Okay, so you may not recognize the Precambrian. How about the Paleozoic?

The first period of the Paleozoic Era was the Cambrian. By the beginning of the Paleozoic, organisms evolved shells. Shells could hold their soft tissues together. Shells could protect them from predators and from drying out. Some organisms evolved external skeletons. These are called exoskeletons. Organisms with hard parts also make good fossils. Fossils from the Cambrian are much more abundant than fossils from the Precambrian.

The warm, humid climate of the early Cambrian was good for life. There was a tremendous increase in diversity. There was also an amazing increase in the number of living things. For these two reasons, this time period is called the Cambrian Explosion.

With so much diversity, complex ecosystems could develop. All of this life was in the seas.

The first fish were simple, armored, jawless fish. Fish have internal skeletons. Some, like sharks, skates, and rays, have skeletons of cartilage. More advanced fish have skeletons of bones. Fish evolved jaws and many other adaptations for ocean life. Pictured below is some of the diversity of Earth's oceans (Figure below).

Mudskippers are fish that are able to walk short distances.

An organism that lives in water is supported by the water. It does not need strong support structures. It also does not need to be protected against drying out. This is not true of land. Moving from the seas to land required many adaptations.

Algae had covered moist land areas for millions of years. By about 450 million years ago, plants began to appear on land. Once there were land plants, animals had a source of food and shelter. To move to land, animals needed strong skeletons. They needed protection from drying out. They needed to be able to breathe air. Eventually they developed skeletons, lungs, and the other the adaptations they needed moved onto the land.

Halkieria, or scale worms, are an example of a fossil life from the Cambrian.

One group of fish evolved into amphibians. Insects and spiders were already land dwellers by the time amphibians appeared.

Between the Paleozoic Era and the Mesozoic Era was the largest mass extinction known. At the end of the Permian, nearly 95% of all marine species died off. In addition, 70% of land species became extinct. No one knows the cause of this extinction. Some scientists blame an asteroid impact. Other scientists think it was a gigantic volcanic eruption. It is possible that multiple things went wrong for life at the same time. The environment was changing, an asteroid impacted, and a giant volcanic eruption took place.