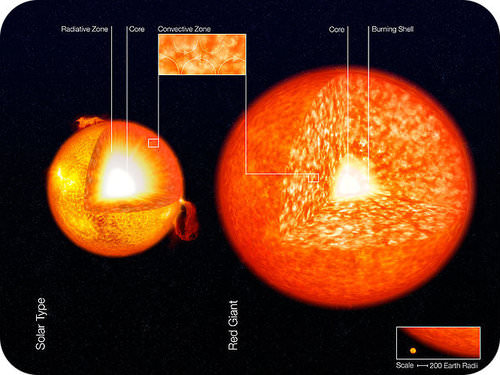 What's next for the Sun?

What happens after our Sun comes off the main sequence? Our Sun will become an enormous red star. It will grow so large that it will extend beyond Mars to the edge of the asteroid belt. Obviously, it will engulf our Earth. Betelgeuse is a red giant star that you can see in the sky near Orion.

Eventually a main sequence star will use up all of its hydrogen. It then starts to fuse helium atoms into larger elements like carbon. At this time, the star’s core will collapse inward. The star's outer layers will spread out and cool. The result is a larger star that is cooler on the surface, and red in color. The star is now a red giant.

Eventually a red giant burns up all of the helium in its core. What happens next depends on the star's mass. A star like the Sun stops fusion and shrinks into a white dwarf star. A white dwarf is a hot, white, glowing object about the size of Earth. Eventually, a white dwarf cools down, and its light fades out.

Sirius (Figure below) is seen as the brightest star in the sky. It is actually a binary star system. Sirius A is on the main sequence. Sirius B is a tiny white dwarf. 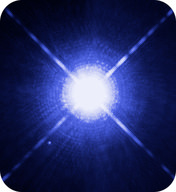 Sirius A is the large star. Sirius B is the tiny dot on the lower left.