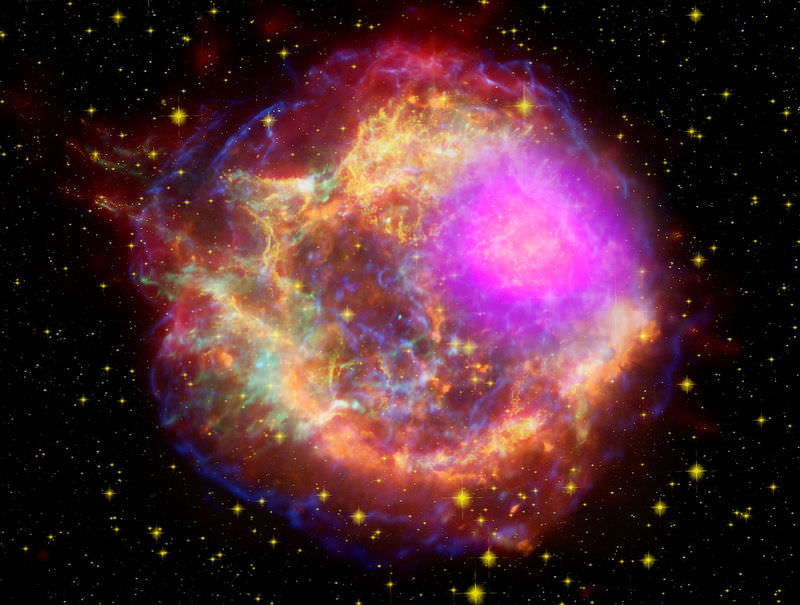 What if the sun was larger?

A larger star has a different fate. It will not just eventually fade away. A large star will explode. These explosions are very important for all of us. We could not exist without them. To see the results of supernova explosions, you need only look at yourself.

A more massive star ends its life in a more dramatic way. Very massive stars become red supergiants. Unlike a red giant, when all the helium in a red supergiant is gone, fusion continues. Lighter atoms fuse into heavier atoms up to iron atoms. Creating elements heavier than iron through fusion uses more energy than it produces. For this reason, stars do not ordinarily form any heavier elements. When there are no more elements for the star to fuse, the core succumbs to gravity and collapses.

Betelgeuse (Figure below) is a red supergiant. VY Canis Majoris, the largest known star, is even larger. It is classified as a red hypergiant.

The red star Betelgeuse in Orion is a red supergiant.

When there is nothing left to fuse, the star’s iron core explodes violently. This is called a supernova explosion. The incredible energy released fuses heavy atoms together. The elements heavier than iron form in supernova explosions, including gold, silver, and uranium. A supernova can shine as brightly as an entire galaxy, but only for a short time, as illustrated below (Figure below).

(a) NASA’s Chandra X-ray observatory captured the brightest stellar explosion so far, 100 times more energetic than a typical supernova. (b) This false-color image of the supernova remnant SN 1604 was observed as a supernova in the Milky Way galaxy. At its peak, it was brighter than all other stars and planets, except Venus, in the night sky.

The Importance of Supernovae

All chemical elements except hydrogen, helium, and lithium were created in stars. These chemical elements are found in our solar system and on Earth because of supernova explosions. This is what people mean when they say that we are all made of stardust.