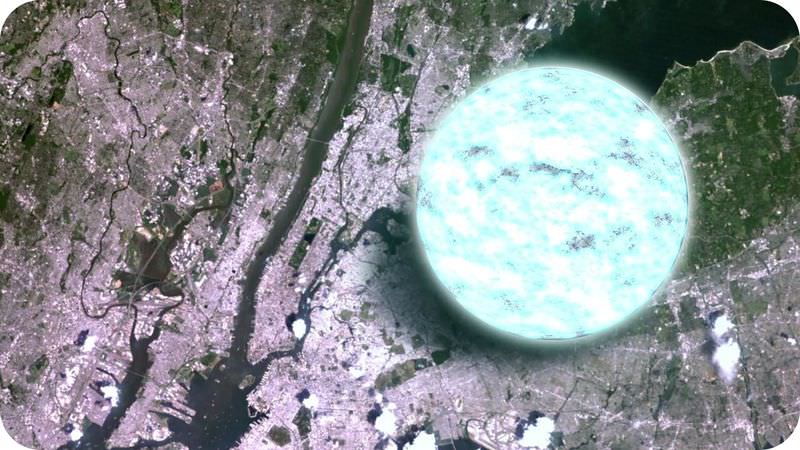 How dense can you get?

A neutron star has about 500,000 times Earth's mass. It is the size of Brooklyn, New York. These objects have an immense amount of gravity, but not as much as a black hole!

After a supernova explosion, the star's core is left over. This material is extremely dense. What happens next depends on the core's mass. The core might be less than about four times the mass of the sun. In this case, the star will become a neutron star. A neutron star (Figure below) is made almost entirely of neutrons. A neutron star has more mass than the sun, but it is only a few kilometers in diameter. 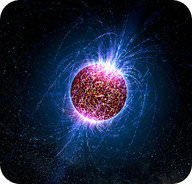 An artist's depiction of a neutron star.

A pulsar is a rotating neutron star that emits radiation in pulses. A pulsar can be seen only when the beam is pointing toward Earth. Pictured below is a nebula that looks like a cosmic hand (Figure below). There is a bright swirl of gas in the wrist of the hand. A very tiny but bright neutron star is in the center of that swirl.

A neutron star at the center of a nebula.

A pulsar sits in the center of this nebula.

The core remaining after a supernova could be more than about five times the mass of the sun. In this case, the core collapses to become a black hole. Black holes are unimaginably dense. Not even light can escape their gravity (Figure below)! This is why they are black. We can't see black holes.

How can we know something exists if radiation can't escape it? A black hole affects the objects around it. It affects them with its gravity. Some radiation may leak out around the edges of a black hole. A black hole isn't a hole at all. It is the tremendously dense core of a supermassive star. 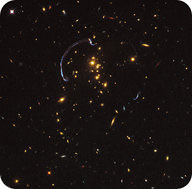 The light of these galaxies is being bent by a black hole.