Imagine that it is November 1, 1954 and Dwight “Ike” Eisenhower is president and Leo Durocher’s Brooklyn Giants have just swept the World Series from the Cleveland Indians. Willie Mays has become a World Series legend after making “The Catch” in center field over his head with his back to the infield. Today, you have also just purchased a Regency TR-1 (Figure below), the world’s first “pocket” radio. It cost $49.95 (equivalent to $400 in 2007 dollars) with its four transistors, and you are now listening to Elvis Presley’s first hit, “That's All Right”. The radio is gray, weighs 12 ounces, and with a size of 3′′×5′′×1′′, you could slip it right into your pocket. This is a lot more convenient than the old vacuum tube portable radios which were bigger, bulkier, and heavier than the new transistor radio. One of these is an RCA 66BX, a six-tube portable radio that weighed 3 pounds and was 7′′×5′′×2′′ in size. Where did this incredible piece of shrinking technology come from? We shall see. 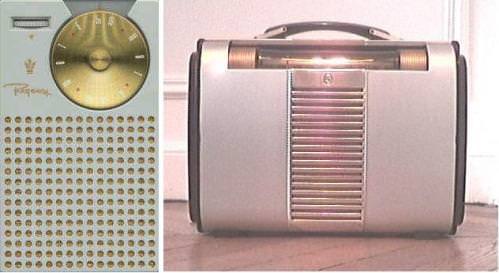 The basic scientific knowledge necessary to develop a transistor radio started from the time when, on December 14, 1900, German physicist Max Planck explained to the world how an atom’s electrons behaved with a new theory called quantum mechanics. Over the next 20 years a mathematical model was developed for this theory, including an important equation called Schrödinger’s equation. From there, it was these basic principles of science and mathematics directed toward their practical application in electrical devices that led three researchers at Bell Labs on a race. The race was to invent a solid-state device that would replace bulky, unreliable, and energy-consuming vacuum tubes used in consumer electronics (such as radios) at the time. So it was that, on October 16, 1947, physicists John Bardeen, Walter Brattain and William Shockley, applied the mathematics and science of quantum physics to semiconductors to invent the world’s first transistor. They had created a device that could amplify a weak electronic signal 18 times over a wide range of frequencies. For their efforts they received the Nobel Prize in 1956.

Now that this new device existed, how would it be used? Texas Instruments used special materials processing techniques to make very pure semiconductor material necessary for transistors and started manufacturing them by 1952. Using those transistors, which cost $2.50 each ($2.50 will buy 100 million transistors on an integrated circuit today), engineers at the Regency Division of IDEA (Industrial Development Engineering Associates) of Indianapolis, Indiana, used the engineering design process to design, develop, and fabricate the world's first pocket radio. The electrical engineers at Regency used their industrial experience and the knowledge from their education on physics, mathematics, engineering science and electrical engineering to design a small radio; 100,000 units were manufactured. The connections of science and math to engineering are clear. The understanding of a phenomenon of the natural world, quantum physics, and the mathematical modeling of the phenomenon promoted the insights on the electrical behavior of semiconducting materials. It was the three researchers at Bell Labs who were searching for a solution to the well-defined problem of poor electrical behavior of vacuum tubes that led the team to invent the transistor. It was a very practical device indeed, since materials engineers at Texas Instruments were able to produce transistors in quantity so that another team of electrical engineers at IDEA could design, develop, and manufacture that first pocket radio.

The above case history of the first transistor radio illustrates the interplay of math, science, and engineering that occur in commercialization of a new device that later thrilled the country. And it did not take long for society to realize the benefits of quantum mechanics, Schrödinger’s equation, and the invention of the transistor. You could see it on some playgrounds a year after the Regency TR-1 was first merchandized. A crowd gathered around kids that brought their dads’ pocket radios to listen to the ′55 World Series when the Brooklyn Dodgers beat the New Yankees in seven games. That miraculous little radio was a reflection of the “can do” spirit of the decade of the 1950s. Engineering could make science fiction reality. At the time cartoon detective character Dick Tracy had an imagined video-walkie-talkie-computer wrist watch, which he used to run down the city’s criminals. Part of it became a reality but now, a half century later, today’s high tech embodiment of Tracy’s watch, the iPhone, can do everything Tracy’s watch did and more. Next, let us consider the impact of technology in your own life from the exercise below. 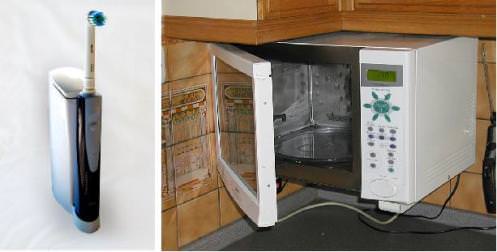 How does technology affect you and your everyday life? Technology created by engineers affects everyone in their daily lives, usually in subtle understated ways. Try this exercise to explore the impact of technology with devices such as the electric toothbrush or the microwave, as shown in the Figure above.