This chapter has already introduced some ways in which science and math are connected to engineering. The chapter will continue to explore these connections in invention, innovation, education, careers, and design, as well as the impact on our daily lives. It is also becoming clear why it is critical to prepare for engineering education in college by taking and doing well in science and math courses throughout elementary, middle, and high school. In fact, the single best indicator of success in graduating with a college degree in engineering, science or math is taking courses in high school that include four years of math (at least through trigonometry) and three years of lab science. In the remainder of this chapter, we will now expand, articulate, detail, and exercise the engineering–math–science connection. The techniques of mathematics and the phenomena of science are like the brushes and colors on an artist’s palette. Just as an artist creates a new reality with his/her painting, so does an engineer create a new reality for how individuals live in a society. We have seen an example of this not only with the creation of the first pocket radio, but also how the reality of our daily lives have been impacted by other artifacts such as the cell phone and the computer. The next section will examine in greater detail the nature of the connection between math, science, and engineering.

Engineering creates valued products such as the pocket radio. This is done by analyzing the nature of a problem or a need and then applying knowledge of math and science while completing the engineering design process to develop a solution to the design problem. A knowledge of science (e.g., chemistry, physics, and biology) helps the engineer understand the constraints inherent in a problem and helps the engineer develop possible approaches for a solution. Math (e.g., algebra, geometry, calculus, computer computation) is used both as a tool to create mathematical models that describe physical phenomena and as a tool to evaluate the merit of different possible solutions.

The profession of engineering is more formally defined by ABET, an organization that accredits college engineering programs, as “Engineering design is the process of devising a system, component, or process to meet desired needs. It is a decision-making process (often iterative), in which the basic sciences, mathematics, and the engineering sciences are applied to convert resources optimally to meet these stated needs.” Within this definition, science and mathematics are described as an essential part of the entire engineering process. They do not act alone within this process. “Engineers apply the principles of science and math to develop economical solutions to technical problems. Their work is the link between perceived social needs and commercial application.” (US Department of Labor) The goals of math and of science in engineering differ from those within the field of mathematics (where the goal is to quantitatively represent functional relationships) or the field of science (where the goal is to understand the natural world). In engineering, math and science are tools used within the engineering design process. Using the design process to address a problem or an issue leads to the solution of the problem and a product which might be a component, a system, or a process that fulfills a need that will benefit society. All fields of engineering use the tools of both math and science throughout all steps of the engineering design process. Effective use of math and science are critical to creating a high-quality solution to a need and an associated product of the process.

It often occurs that a high-quality product that comes out of an effective design process (including math and science) is taken for granted, such as a bridge standing for decades or centuries with no problems. Such a situation is illustrated with the Golden Gate Bridge, which has stood for more than seven decades since it was opened on May 27, 1937 (Figure below). When an inferior solution comes out of a flawed design process, catastrophe may result, and a bridge may collapse with possible loss of lives. Such an occurrence is illustrated below by the Tacoma Narrows Bridge Collapse (Figure below). On November 11, 1940, this bridge, located at Puget Sound, Washington, began swaying strongly in the wind and eventually broke up due to the resonance of the bridge which twisted until it broke up. There are mathematical tools available to analyze for waves and resonance of structures, but they were not applied in the design process of the bridge. This demonstrates the importance and need to broadly explore and utilize mathematics and science appropriate to the engineering design problem at hand.

Activity - Impact of disaster on an industry's design practice.

There have been many other disasters that occurred because of a flawed design process. One is the consecutive crashes of two British comet jets in 1954. Go to the two websites that describe the investigation and the resulting design changes: http://en.Wikipedia.org/wiki/De_Havilland_Comet and http://en.Wikipedia.org/wiki/TWA_Flight_800. How did the disasters cause engineers to change the airplane's design?

The meaning of what science is can be debated and has changed over time. It is reasonable to think today of science as a process by which humans try to understand how the natural world works and how it came to be that way. The branches of science most frequently used by engineers include physics, chemistry, and biology. This is reflected by the fact that almost all undergraduate engineering programs require students to take foundational courses in those subjects. An example of how such science connects to engineering can be shown with the global problem of the lack of access to clean water by populations in some of the developing countries around the world. In developed countries turning on the bathroom faucet gives safe and drinkable water gushing from the tap. This safe and convenient water is actually a luxury that is not present everywhere. When it is not available, and water is not purified, people can become sick or even die from causes such as dehydration, cholera, dysentery, and cancer. So how have engineers figured out how to find, transport, purify, sanitize, and deliver water to those who need it? The following example should help answer that question as well as give a concrete example of how science connects with engineering.

Although more than half of the surface of the earth is covered with water, it is not accessible to plants, animals, or humans because of its 3−4% salt content. So, can we just remove the salt? No, because it is not so easy and can be costly. Science provides a variety of phenomena that can be used to desalinate water, and a few will be presented here. Chemistry tells us that there are many ways to desalinate water. One of the ways that water can be purified is by evaporation and condensation, which leaves the impurities in the original water. Another way is that, in freezing water the ice leaves the impurities behind in the unfrozen liquid. Another way is based on the fact that certain pore sizes of molecular membranes will allow water to diffuse through the membrane under pressure while leaving behind larger complexes of sodium and chlorine. Chemistry also has data on a variety of physical properties of water and salt water, including the thermodynamic data of heat of evaporation, heat of condensation, and heat of freezing. So what can be done with the different phenomena and all the data that are available?

The first question to answer is: Are there any types of engineering fields with individuals that work with such phenomena and data with the goal of desalinating water? The answer is yes. Chemical engineers are trained to use such phenomena and data to design and build large-scale processing plants for producing products such as cosmetics, antibiotics, and gasoline as well as purified water. Today, millions of gallons of water are being desalinated by flash evaporation, which uses evaporation and condensation phenomena, and by reverse osmosis, which uses molecular membrane technology based on membrane diffusion principles. A nuclear driven flash evaporation plant located on the Caspian Sea is shown in Figure below. 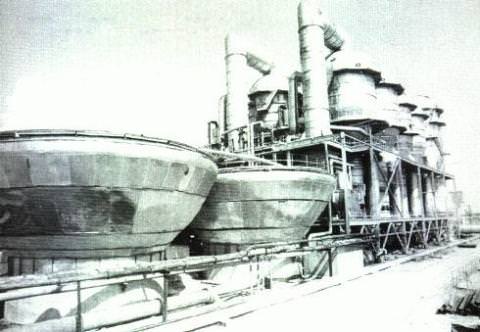 Math is utilized in a variety of ways within many fields of engineering. The most crucial aspects of math within this field involve cost–benefit–risk analysis and the use of mathematical models. “Mathematical models may include a set of rules and instructions that specifies precisely a series of steps to be taken, whether the steps are arithmetic, logical, or geometric. Sometimes even very simple rules and instructions can have consequences that are difficult to predict without actually carrying out the steps. ... Often, it is fairly easy to find a mathematical model that fits a phenomenon over a small range of conditions ... but it may not fit well over a wide range.” (AAAS) Given the importance of having an end result that not only works, but also is safe and dependable, it is easy to understand why the use of mathematical models is an invaluable aspect of the engineering design process, as well as how these models would be applied to various steps within this process. Nearly every aspect of mathematics can be, and is, applied to the engineering design process in some way. All fields within engineering require an advanced knowledge of, and the ability to properly use, many math skills, including (but not limited to) algebra, calculus, geometry, measurements, tables and graphic representations of results, mathematical formulas, and time lines.

Activity—What kinds of science and math do engineers need to address some of today’s global societal issues?

Consider the list of contemporary global societal issues shown in Table 1. From the list, select two or three global issues of interest to you and write them down. Think about them and then write about the math and science that might be used to address each of the particular issues.

Icebergs breaking off glaciers and an oil spill.