This section focuses on major structures created by engineers in ancient civilizations. One of the greatest engineering accomplishments in the ancient world, and certainly one of the best-known, was the construction of the Egyptian pyramids. The Egyptian pyramids were built in the period from approximately 2700 to 2200 BC. Figure below shows the pyramids at Giza. Three factors were important to Egyptian engineering. The first was that the Egyptian pharaohs were willing to devote almost unlimited time and resources to the construction of the pyramids. There was an almost unlimited availability of skilled human labor (animals did not provide significant labor in the pyramid construction). Second was the ability to organize all of these workers in a very efficient way. Egyptian laborers worked under the absolute control of a single head engineer and his subordinates. The third was that there were sources of sandstone, limestone, and granite very close to the sites of the pyramids. The pyramids were probably constructed using earth ramps to raise the stones to the level necessary; the ramps were later removed. Egyptian engineers worked from plans drawn on papyrus. Egyptian engineers had an excellent knowledge of geometry and measurement, which is apparent from the accuracy with which the pyramids were constructed. In addition to the pyramids, Egyptian engineers built many temples and other buildings. 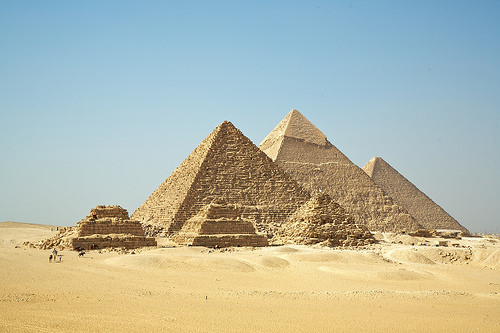 The Egyptian pyramids at Giza.

The Romans are also known for their engineering works. These works include road systems, aqueduct systems to provide drinking water, and monuments and buildings. By AD 200, the the Roman road system included 44,000 miles of well-constructed roadway. Roman roads tended to follow a straight line up and down hills, rather than bending to follow level contours. This was because the roads were primarily designed for military use and marching soldiers, not for transportation of cargo.

The Roman aqueducts are famous engineering accomplishments as well. The Romans built aqueducts to move water from its source in springs or rivers to Roman cities. We are familiar with the arched bridges used to carry aqueducts across valleys; the aqueduct shown in the Figure below is one such bridge. 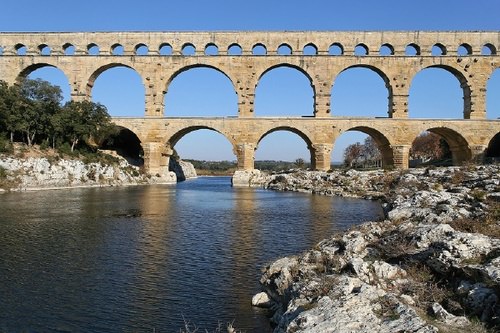 The Pont du Gard is an aqueduct in the south of France constructed by the Roman Empire.

One common theme that runs through these engineering accomplishments is that these projects were very large, especially for the ancient civilizations in which they were pursued. In addition to good engineering, their implementations required large commitments of resources by governments to support large groups of laborers and provide significant amounts of material. Thus, the engineers that led these projects needed skills far beyond technical ability. They needed to understand and be able to work within the social structures of their times to obtain the resources for their projects. They needed to understand the capabilities of the laborers who would work on the projects.