The medieval and Renaissance periods in Europe span the time from approximately AD 500 to AD 1600. Life in medieval Europe has often been characterized as the “dark ages,” which gives the impression that there were no advances in technology or engineering. In some aspects, this characterization is correct. For example, the elaborate water works created by the Romans to supply their cities with potable water were not duplicated in medieval European cities. Neither were sanitary sewers. Thus, waterborne disease was a recurring problem in many of these cities. However, in other aspects this characterization is not correct. Several important engineering concepts and techniques were developed during this time which laid the foundation for rapid technological advance during the Industrial Revolution. Engineers developed techniques for constructing astounding buildings, including cathedrals and castles. Engineers also improved the designs of ships, making European exploration of the rest of the world possible. The development of the printing press and associated type technology, as well as the development of linear perspective and engineering drawing techniques, enabled literacy and communication of information. We consider these advances in this section.

One area in which engineering made significant advances was the construction of cathedrals, castles, and other large structures. Cathedrals were built across Europe beginning in the fourth century and continuing into the present. In medieval Europe, cathedrals were built in the Romanesque style (in the tenth and eleventh centuries) and later in the Gothic style (in the twelfth through sixteenth centuries). Romanesque buildings are characterized by thick walls, round arches, and large towers. Gothic buildings are characterized by thinner walls with large windows, pointed arches, and flying buttresses. Several technological advances made the Gothic cathedral possible. Flying buttresses transfer the gravitational forces from roofs and upper stories to external pillars; this allowed walls to be thin with large windows. In addition, the use of pointed arches and ribbed vaults transfers forces to columns instead of the walls.

The west facade of the cathedral of Notre Dame de Paris. 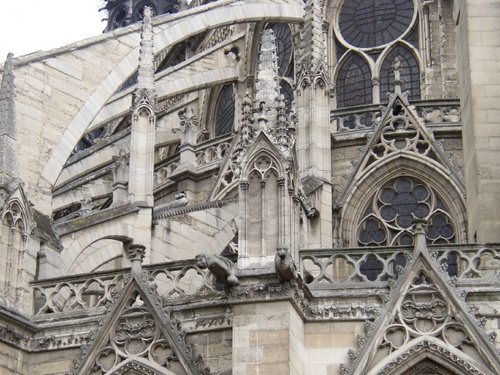 Flying buttresses on the cathedral of Notre Dame de Paris.

Master masons directed the construction of these cathedrals and other buildings. Master masons supervised large groups of workers. They were the structural engineers of their day, and, when working on military projects, were actually called engineers. They had a good understanding of geometry and arithmetic. However, they did not have the engineering theory used by structural engineers today (a mathematical understanding of how loads are transferred in structures as well as the characteristics and strengths of building materials). Instead, they often used rules of thumb, which had been developed from the experience gained by previous generations. Often, these rules of thumb led to mistakes, and plans were often altered to correct these mistakes.

Another aspect in which engineering made significant progress in medieval Europe was the design and construction of sailing vessels. In Scandinavia, the Viking longship reached the height of its development during the Middle Ages. These ships were very fast; they were used to carry cargo as well as transport Viking raiding expeditions over long distances. Longships had a single mass that was rigged with a square sail.

Progress on sailing vessels in medieval Europe, particularly by Spain and Portugal, set the stage for European exploration and colonization in North and South America and Africa. The two types of sailing vessels that had the largest impact on this exploration were the caravel and the carrack. A caravel is a small, highly maneuverable ship with two or three masts as shown in the Figure below. A carrack is a larger ship with three or four masts and square sails; it was large enough to carry a significant amount of cargo and to be stable on long ocean voyages. The second image (Figure below) shows a carrack. Christopher Columbus’ (1451–1506) small fleet that sailed to the New World consisted of one carrack (the Santa Maria) and two caravels (Pinta and Nina). 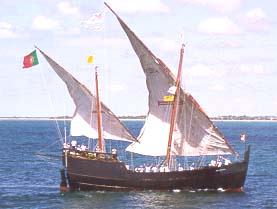 A caravel is a small highly maneuverable ship with two or three masts. 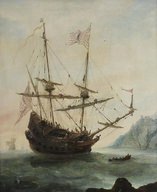 A third advance in the Middle Ages, which may not at first be recognized as engineering, was the development of a printing system that used movable type. The technology to print books and make them available at a price that a large segment of the population can afford is one of the most significant advances ever. The development of this technology has been called “the technical advance which facilitated every technological advance that followed it” (Derry and Williams, 1961). Johannes Gutenberg (about 1400–1468) is often credited with the development of movable type; however, this development, similar to many engineering advances before and after, was not made by a single person working in isolation. Rather, Gutenberg combined several processes that had already been developed in a novel way to print books; his methods were further improved by those who followed him. His genius was to combine type casting, ink, and a printing press into a system that could mass produce books.

Before the development of movable type in the fifteenth century, almost all books were copied by hand. A scribe toiled laboriously to create a copy of a book, often requiring a whole year to create one. These handwritten books were so expensive that only the very wealthy could afford them. Movable type was probably first invented in Asia. Bronze type was in use in Korea and China in the early fifteenth century. In Europe, copper plates were engraved to produce playing cards and illustrations; this practice was well established by the mid-fifteenth century. Wooden type was used in the 1420s in the Netherlands.

Johannes Gutenberg was a silversmith in Mainz, Germany. He was probably aware of these previous advances in printing and typography. In 1426, Gutenberg began printing with individually cast metal letters; each letter was on the surface of a block. He cast these letters using type metal, an alloy of lead, tin, and antimony. It has long been thought that letter blocks were formed using dies (molds) of soft metal, so that in all blocks of a given letter, the letter form would be identical. However, modern analysis suggests that the form for each letter was individually inscribed in clay and then cast, so that each block for a given letter was subtly different. To typeset a page of text, the letter blocks were arranged in rows of text, and the rows were then arranged into pages. This process is illustrated in the Figure below. Once the page was typeset (a laborious process that could take a whole day for a single page), it could be inked and printed as many times as necessary to create copies of a particular page in a book.

Note that the creation of books and other material required both technology for typesetting and technology for printing. Typesetting is the process of arranging letters and other content (e.g., illustrations and drawings) into the desired pattern, while printing is the process of getting the ink on the paper in the desired pattern. 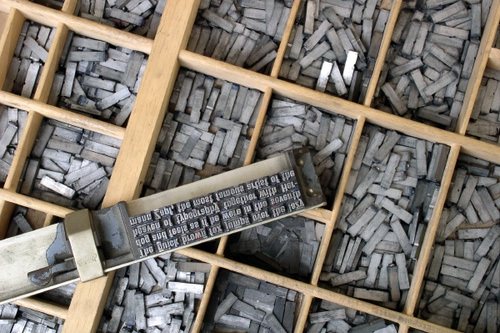 In 1455, Gutenberg used this system to print the Bible. It is believed that he printed about 180 copies. The images (Figures below and and below) show this Bible. 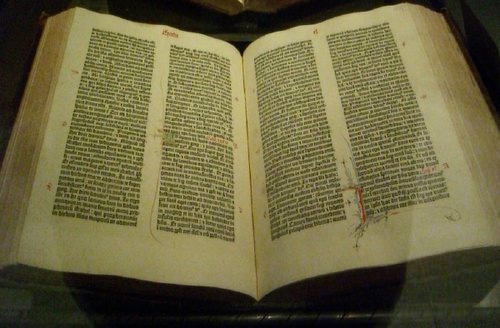 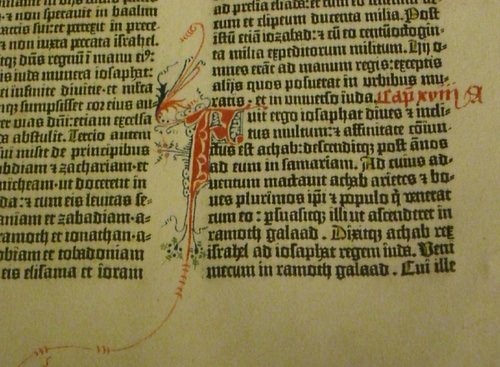 A close view of a page from the Gutenberg bible. The black text was printed using the printing press; then, the red decorations were added by hand.

Gutenberg’s methods were immensely successful, and were widely copied and improved. By 1480, almost every large European city had at least one printing press. Venice emerged as the printing capital of Europe. These early printers designed many fonts that are very similar to those used today.

One of the primary engineering advances of the Renaissance was the development of linear perspective and the invention of several methods of technical drawing, including cutaway drawings, exploded drawings, and rotated views. It may not be clear why these techniques are such significant advances. However, these drawing techniques made it possible for engineers to study mechanical systems and buildings without the need for three-dimensional models; since a two-dimensional drawing can typically be created much more quickly than a three-dimensional model, new drawing capabilities greatly accelerated the pace at which engineering work could be accomplished. These capabilities also improved the ability of engineers and scientists to communicate ideas and concepts. Thus, they helped drive the transformation of engineering from using rules of thumb and accumulated experience to a discipline based on scientific principles and theory.

Mariano di Iacopo (1382–about 1458), known as Taccola (the crow), created two books of drawings of mechanical devices. He invented primitive forms of the cutaway and exploded views. In a cutaway view, portions of an object that block the view of the region of interest are cut away or removed so that the region of interest can be seen. In an exploded view, the components of an assembly are drawn separated from each other so that each component and its relationship with the others can be seen.

Leonardo da Vinci (1452–1519) is the best-known of these Renaissance artist-engineers. He used drawing and text together to perform thought experiments in many areas of engineering and science. These thought experiments include the design of a helicopter-like flying machine, a military tank, and a bridge. da Vinci developed the form of an engineering or scientific notebook that is used to support the process of engineering design or scientific inquiry. The Figure below shows the design of a giant crossbow that da Vinci created. 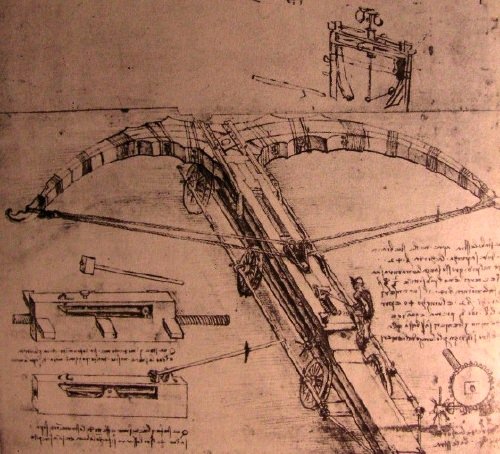 Drawing of the design of a giant crossbow created by Leonardo da Vinci.