The pace of technology development increased steadily in the last half of the nineteenth century and the first decades of the twentieth century. New technologies were involved in the creation and growth of corporations; fortunes were made through new technological developments.

By 1870, scientists such as Michael Faraday (1791–1867) and James Maxwell (1831–1879) had provided a firm theoretical understanding of electricity. Electricity was widely used in communications—the telegraph made long-distance communication essentially instantaneous. Electricity was supplied to the telegraph by a battery or an inefficient generator, which was still very expensive.

A dynamo is a machine that converts rotational energy supplied by a steam engine or waterwheel into electrical energy. During the 1870s, dynamos were developed that provided efficient methods of generating electricity. This set the stage for the development and widespread use of the lightbulb.

Thomas Edison (1847–1931) is generally given credit for the invention of the lightbulb in 1878. He was a prolific inventor, developing devices such as the phonograph (Figure below), which recorded and played back sound, and a moving picture projector; he is quoted as saying “genius is one percent inspiration and ninety nine percent perspiration.” He was not a solitary inventor—he led a large research laboratory with over 30 scientists, engineers, and craftsmen. His practice of using an organized research laboratory to develop new inventions was soon adopted by many others and formed the basis of much industrial manufacturing. 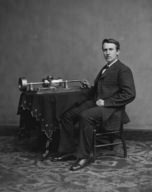 Thomas Edison and an early phonograph.

Edison began the development of the lightbulb to provide a method of lighting homes and businesses at night. His goal was to make money. The competing technologies of the time were gas lighting and carbon arc electric lamps. Carbon arc lamps emit a very bright, harsh light; they were not suitable for indoor lighting. Thus, one goal of Edison's development was creation of a light source that provided lower light levels than carbon arc lamps. To be economically competitive, electric lighting had to be safer and cheaper than gas lights; this imposed difficult constraints on the design of the lightbulb.

As is often the case, Edison did not invent the lightbulb from scratch. Rather, he adapted and improved existing technologies, particularly related to the lightbulb filament and to creating a vacuum within the lightbulb, to create a working bulb. In addition to the lightbulb, his research lab created a system of dynamos and wiring to provide electricity to power his bulbs in homes and businesses. In the process, they developed many devices that are still used in modern systems, including fuses to prevent current overloads, meters to measure electricity use, and switches to turn lights off and on. Edison’s first lighting system was installed in New York City in 1881. The Figure below shows one of Edison’s original lightbulbs.

An original bulb made by Edison’s workshop in 1879.

Although he was hailed as the inventor of the lightbulb, Edison’s electrical system was not the technology that was ultimately used to produce and distribute electricity in most parts of the world. Edison’s system used direct current (DC). Shortly after Edison installed his first system, George Westinghouse (1846–1914) developed a competing system that used alternating current (AC). The first AC current system was installed in 1886, and several more followed in the next several years. The competition between Westinghouse and Edison to dominate the electrical generation and distributional business was labeled “The War of the Currents.” AC systems had significant technical advantages over DC systems, but Edison mounted an aggressive public relations campaign that played on the public’s fears of electrocution. In one particularly distressing case, the state of New York bought an electric chair to execute criminals; this chair operated using AC current. Edison attempted to name the process of being executed “being Westinghoused.” By 1892, AC became the primary method of electrical distribution, and even Edison’s company began manufacturing AC equipment.

Orville Wright (1871–1948) and Wilbur Wright (1867–1912) were brothers who are credited with having achieved the first powered flight. They built on the earlier work of many pioneering engineers, including Otto Lilienthal (1848–1896) and Samuel Langley (1834–1906). They owned and operated a printing press and a bicycle shop in Dayton, Ohio. The bicycle shop provided both funding and mechanical experience for their investigation into powered flight.

They began serious investigation into flight in 1899. The death of Otto Lilienthal in a glider accident in 1896 as well as other accidents involving experimental gliders convinced them that an extremely important aspect of developing a heavier than air flying machine is understanding how to control it. They felt that the other primary issues—sufficiently powerful engines and shaping the wings for lift—had been solved. Thus, unlike other investigators of flight, they conducted careful experiments with kites and gliders to understand how to create controllable airplane designs. They developed a technique of wing warping (bending of wings) to cause the aircraft to bank and move up and down.

In 1900, the Wright brothers began experiments at Kitty Hawk, North Carolina, with gliders. Between 1900 and 1903, they combined scientific theory with careful experiments to refine the equation that predicted the lift of wings. In the process, they discovered that long, narrow wings provided more lift than short, wide ones. They used this discovery in creating their powered aircraft. They also discovered how to control an aircraft in turns—by banking the wings and turning the nose with a vertical rudder. In 1902, they made between 700 and 1,000 flights in gliders to confirm that they could be properly controlled. They applied for a patent on their three axis method of control in 1903.

In the 1890s, the nascent automobile industry had developed the gasoline internal combustion engine to the point that, by mid-1903, it was a viable power source for the Wrights planned airplane. Their shop mechanic built an engine in six weeks. They took their airplane to Kitty Hawk, North Carolina. After several weeks of delays necessitated by repairs of propeller shafts, on December 17, 1903, the Wright brothers made four powered flights, the longest of which was over 850 feet. Figure below shows this first powered flight. 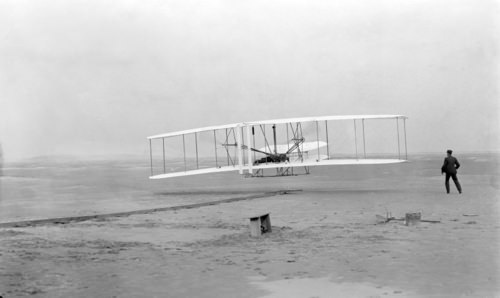 Between 1903 and 1908, they developed the Wright flyer, which they attempted to market to the U.S. Army. Between 1908 and 1910, they gave demonstration flights in France and the United States. They were celebrities in France, and thousands of people gathered to watch their airplanes fly. They incorporated the Wright company in 1909; Orville Wright sold the company in 1915.

Neither of the Wright brothers had a formal education in engineering or science. They did have significant technical experience from their bicycle shop, and they used the scientific method to develop the control structures that made their airplane successful.

The late nineteenth and early twentieth century saw the automation of the setting of type, much as the early nineteenth century saw the automation of the printing process. Engineers invented machines that could cast and set type much faster than could be done by hand. The two most successful of these machines were the Monotype and Linotype machines.

Tolbert Lanston (1844–1914) invented the Monotype casting system. This system, developed between 1885 and 1896, cast the individual letters from molten type metal, and then arranged the letters into rows of type. This system consisted of two parts: a keyboard, at which an operator would select the sequence of letters and other symbols that were then punched into a paper tape, and the typecaster, which took the paper tape and cast the appropriate letter blocks. The Figure below shows a Monotype keyboard with the paper tape punch. The Lanston Monotype Machine Company was founded in 1887 and eventually manufactured machines in both the United States and England. In 1907, the US Government Printing Office was the largest installation of Monotype machines in the world, with 162 keyboards and 124 casters. 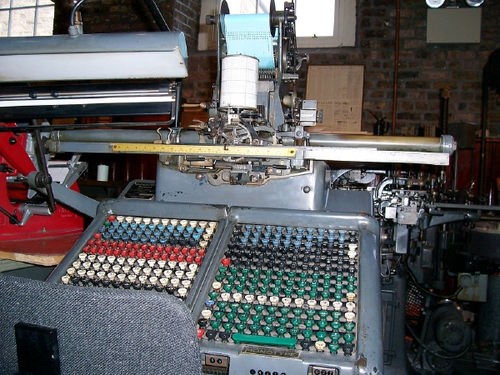 A keyboard for the Monotype casting system.

Ottmar Mergenthaler (1854–1899) invented the Linotype machine. The first Linotype machine was installed in the New York Tribune newspaper office in July of 1886. The Mergenthaler Linotype Company was founded in Brooklyn, New York, in 1889. The Figure below shows a Linotype machine. Using input from an operator at a keyboard, the machine assembled matrices for an entire line of text, which was then cast in type metal as a slug. 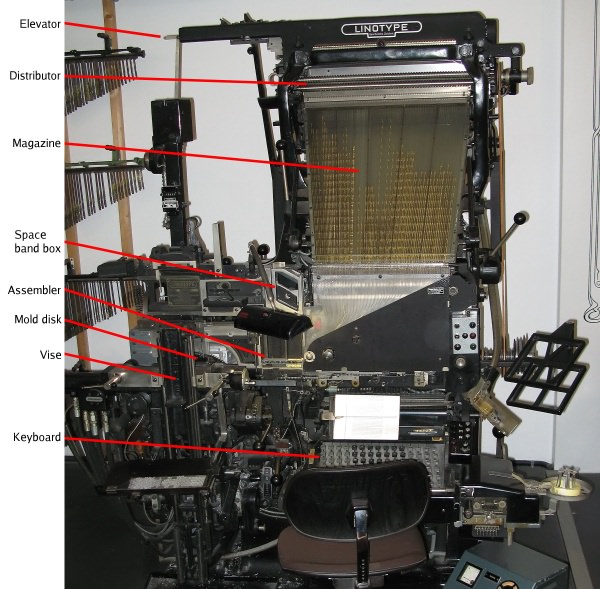 The Monotype and Linotype machines were the primary methods of setting type until the 1950s. In the 1950s, metal type began to be replaced by photo typesetting, in which photographic processes are used to create plates with raised areas that are inked before coming in contact with the paper.

Engineering as a Modern Profession

Through the middle of the nineteenth century, most engineers received training through apprenticeships and on the job experience. In the latter third of the nineteenth century, land-grant colleges were established, and many of these included engineering schools. These schools provided programs of study in the established fields of Civil and Mechanical Engineering as well as the newer fields of Chemical and Electrical engineering. Even though many of the great engineering accomplishments at the turn of the century were made by craftsmen without a formal engineering education, the newly established corporate research laboratories increasingly began hiring workers with university degrees in engineering.