In the early twentieth century, engineering accomplishments increasingly began to affect the lives of middle-class Americans. The automobile provided increased mobility to millions. The development of commercial radio broadcast began the creation of a popular culture and an American mass identity.

Henry Ford (1863–1947) left home at 16 to work as an apprentice machinist in Detroit, Michigan. He was later hired by the Westinghouse Company to service steam engines, and in 1893 became the chief engineer of the Edison Illumination Company. This position provided time and money for him to begin experimenting with vehicles powered by gasoline internal combustion engines. Before 1903, he created several companies to produce and market gasoline powered automobiles, but they were not economically successful.

In 1903, Henry Ford created the Ford Motor Company. His goal was to produce an affordable and reliable car that could be purchased by an average American farmer or worker. After several years of experimentation and design, the Ford Company company introduced the Model T in 1908; (Figure below) shows a Model T. In many aspects, the Model T was quite similar to the car of today: it had a steering wheel on the left, its engine was enclosed in a hood, and it had a windshield and rear wheel drive. Note that Henry Ford did not personally develop the detailed design of the model T. This was done by a team of engineers with the range of skills and expertise necessary for the project. 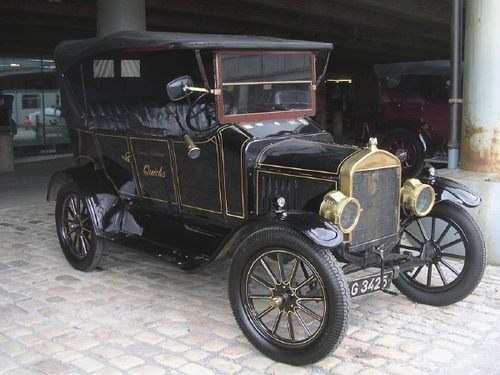 One of the technical advances that made the Model T possible was the use of a vanadium steel alloy with much higher strength than normal steel. However, from an engineering point of view, the most significant innovation associated with the Model T was the production system that allowed it to be produced and sold very economically. Between 1909 and 1913, the Ford company adopted all of the techniques necessary for mass production using an assembly line. These techniques include:

The image (Figure below) shows the use of an assembly line to attach car bodies to the car frame. These assembly-line techniques dramatically reduced the cost of assembling the Model T, and the sales price of the car was repeatedly lowered. In 1909, its first full year of production, 18,000 vehicles were built; in 1915, one-half million were sold, and in 1920, the production exceeded one million annually. 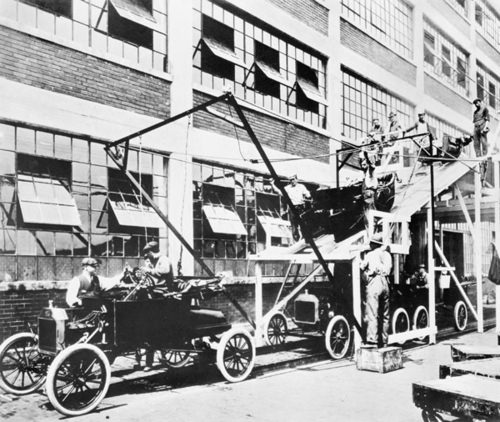 Part of a Ford assembly line.

To retain workers in the difficult assembly-line environment, Ford paid his workers five dollars per day, which is a very high wage for that time period. This, combined with the low price of the Model T, meant that Ford workers could actually afford to buy the car on which they worked. Such buying power and affordability was unprecedented. By the end of the 1920s, one in five people owned an automobile, which dramatically affected the structure of American society.

The advent of radio, which provided live broadcast to millions of listeners simultaneously, was a significant factor in the creation of an American national identity.

In the last several decades of the nineteenth century, physicists such as James Maxwell (1831–1879) and Heinrich Hertz (1857–1894) developed a theoretical understanding of the propagation of electromagnetic waves. They also experimented with methods of producing electromagnetic waves. This work was primarily for scientific purposes; they did not anticipate practical applications of their work.

Beginning in 1894, Guglielmo Marconi (1874–1937), an Italian inventor, began experimenting with radio transmitters and receivers with the goal of creating a system of “wireless telegraphy”—a system that could transmit information much as the telegraph did, but without the need for wires to connect transmitter and receiver. Similar to many engineers before him, he adapted and combined existing technology to form a system that could be used to communicate between land and ships. The system allowed the transmission of Morse code, similar to a wire-based telegraph. By 1903, he had successfully demonstrated the transmission of signals across the Atlantic Ocean. On the basis of his technology, he founded the Marconi Wireless Telegraph Company in 1900. Many of his patents in wireless technology were challenged by Nikola Tesla (1856–1943) and others in the United States and other countries; decisions in these cases vary from case to case and from jurisdiction to jurisdiction.

Marconi’s system allowed transmission of Morse code only. At the turn of the century, several researchers believed that the transmission of voice and other sound by radio could be possible. To this end, several technologies were developed that provided early demonstrations of the concept, but ultimately were not commercially successful. A significant amount of time and money was expended to make them practical, including a significant effort by GE, but these efforts were unsuccessful.

The technology that was eventually successful at transmitting and receiving sound over radio was the vacuum tube. This technology eventually enabled a whole host of electronic developments including radar, computers, and television. The triode vacuum tube was patented in 1906 by Lee De Forest (1873–1961). Throughout the 1910s, several corporate research labs, including those of GE and the AT&T Bell System, worked to improve the triode, and it quickly became the basis of radio transmitters and receivers. The image (Figure below) shows an early radio receiver implemented with vacuum tubes. 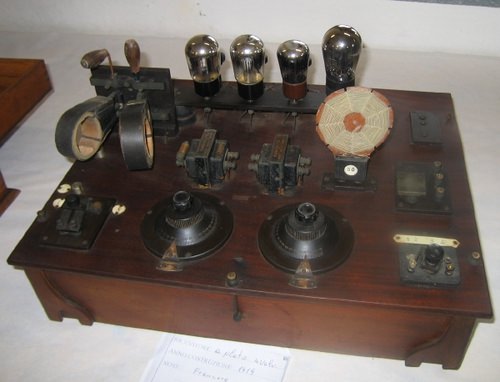 An early radio receiver. The four silvery cylindrical objects along the back of the receiver are vacuum tubes.

In 1910, De Forest used a transmitter and receivers built with triodes to broadcast performances of two operas; this is regarded as the first public radio broadcast. The program was received by radio receivers and several ships in New York Harbor and in hotels around New York; the sound quality was extremely poor.

In 1919, the Radio Corporation of America (RCA) was formed. RCA’s original purpose was to develop radio for point-to-point communications, but David Sarnoff (1891–1971), who was highly influential within RCA and eventually became its president, and others soon realized that radio as a broadcast medium had significant economic potential in the form of sales of radio receivers. However, radio broadcasts were necessary to sell radio receivers. Westinghouse started the station KDKA in 1920. By 1922, over 600 stations were broadcasting. At the same time, GE and Westinghouse began to manufacture home radio receivers.

In 1926, RCA created the first network of radio stations that shared programming, creating the National Broadcasting Company (NBC). NBC was soon followed by the Columbia Broadcasting System (CBS) and the American Broadcasting Company (ABC). Within a decade, the networks had developed the advertiser-supported programming format that is still used in radio and television. The “Golden Age” of radio included programs of all types, from music to sitcoms to adventures, supported by advertising for automobiles, home appliances, cigarettes, and other consumer goods. By the late 1930s, four out of five US households had a radio.

The development of radio, unlike many of the preceding engineering developments, reflects the continuing shift from lone inventors to the work of engineers working within existing corporations. In radio, many of the initial technical developments were made by single inventors or small companies. But once the concepts were established, large corporations became involved and dominated the growth of the markets and technology.