Experimental computers were first developed in the 1940s, and became commercially important in the 1950s. Since then, they have become increasingly involved in almost every component of technology.

Electronics and the Computer

The development of the computer has had as large an effect on society as any previous engineering advance. Today, computers are involved in every aspect of our lives. They allow instant retrieval of information from any part of the world. They monitor and control the performance of almost every mechanical system we use, including automobiles, airplanes, appliances; they also control large systems such as electric power generation and distribution grids. Computers make cell phones and the Internet possible. The computer pervades the creative work of artists; it provides formerly undreamed of opportunities for relaxation and entertainment; and it has dramatically changed the way that engineers and scientists perform their work. In this section, we briefly review the coupled histories of the computer and the electronics industry.

Advances in computer technology depended on developments in the electronic industry; indeed, the advanced computing power available at low cost today is a direct consequence of improvements and advances in the technology of electronics. Beginning in the 1910s, and continuing through the 1950s and 1960s, the vacuum tube was the primary technology used to implement electronic devices such as radios, televisions, and other myriad inventions. However, tubes had several drawbacks—they were large, required large amounts of power, and were relatively fragile.

Most of the pioneering computers designed and built in the 1940s were constructed using vacuum tubes. These early computers were much less powerful than a typical microcontroller that controls a modern microwave oven; the circuits for these early computers often filled entire rooms. Vacuum tube technology was unreliable—tubes often burned out and required replacements. In 1951, the Remington Rand Corporation delivered the first Univac I computer to the US Census Bureau; eventually, more than 40 of these computers were sold at a price of over $1 million each. The image (Figure below) shows a UNIVAC I. In 1952, International Business Machines (IBM) introduced the IBM 701. In the following decades, both of these as well as other companies made significant profits designing and selling large mainframe computers. (Remington Rand eventually became Sperry Rand, which later became Univac.) The design and implementation of computers employed thousands of engineers; most of these engineers were electrical engineers. IBM, with its large sales and service staffs, owned about 70% of the computer market by the late 1950s. This is a position they maintained until the 1970s, when minicomputers were introduced and dramatically cut into the market share owned by mainframe computers. 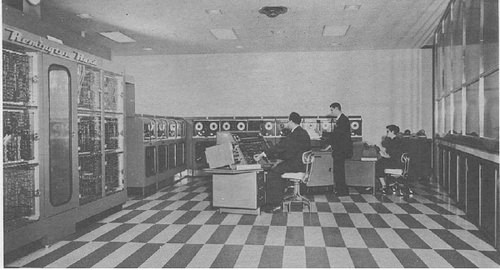 A UNIVAC I installed at the Franklin Life Insurance Company.

In 1948, John Bardeen (1908–1991), Walter Brattain (1902–1987), and William Shockley (1910–1989), three researchers at Bell Laboratories (a research lab of AT&T), invented the transistor. They were awarded the Nobel Prize for this invention in 1956. The transistor performs the same electronic function as a vacuum tube, but since it is fabricated from silicon and metal and requires no glass tube to contain a vacuum, it can be made much smaller and more physically robust than a vacuum tube. A significant amount of research and development was necessary to make the transistor commercially viable; by the early 1960s, transistors had replaced vacuum tubes in most electronic devices. This made possible the portable transistor radio, for example.

Transistors were widely used in the design and construction of computers in the late 1950s and early 1960s. Transistor technology allowed computers to be smaller, faster, and use less power to operate.

A second electronics innovation that dramatically affected computers was the invention of the integrated circuit independently by Jack Kilby (1923–2005) of Texas Instruments and Robert Noyce (1927–1990) of Fairchild Semiconductor in 1958. The integrated circuit combined many transistors into a single silicon chip. Chips could be cheaply and quickly manufactured and provided many benefits to computer designers, including faster computation, lower power consumption, smaller physical size, and lower production costs.

Integrated circuits were used in computer design beginning in the mid-1960s. They made possible the development of the minicomputer. The first minicomputers were made by Digital Equipment Corporation. Other minicomputer manufacturers included Data General, Wang Laboratories, Apollo Computer, and Prime Computer. Compared to a typical mainframe computer, minicomputers were small (about the size of a small desk) and cheap (costing tens of thousands of dollars). The image (Figure below) shows a PDP-12 minicomputer. Minicomputers made computers available to smaller companies and university research laboratories.

A PDP-12 minicomputer manufactured by Digital Equipment Corporation about 1970.

Finally, a new generation of personal computers was made possible by the invention of the microprocessor. Microprocessors were invented independently and about the same time at Texas Instruments and Intel in 1971. A microprocessor is an entire computer processor integrated on to a single chip. The image (Figure below) shows a Zilog Z80 microprocessor that was manufactured in 1976. Microprocessors allowed computers to be built cheaply enough that hobbyists could afford to build their own computers. In the mid-1970s, several companies were founded to supply computers and computer kits to hobbyists. Apple Computer Co. was one of these; Steve Jobs (1955–), its cofounder, quickly realized that the computer could be used by a much larger market than hobbyists, and dramatically increased the market for low-end computers. The next image (Figure below) shows an Apple II, the computer that established Apple as a player in the computer market. In 1981, IBM entered the market with the IBM personal computer (IBM PC) and quickly became the dominant personal computer manufacturer by marketing to business and government users; the IBM PC also played a crucial role in the establishment of a small, new company named Microsoft. 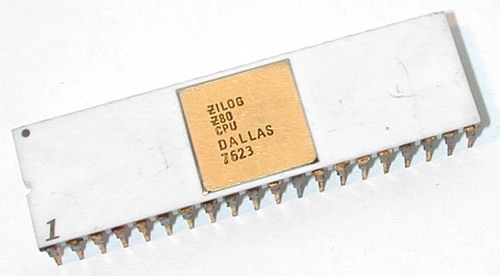 A Zilog Z80 microprocessor manufactured in 1976. 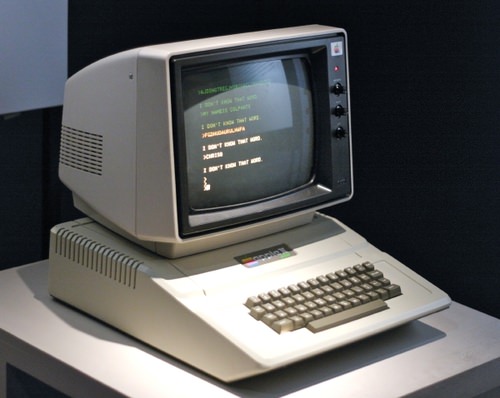 An Apple II computer manufactured about 1980.

Since the invention of the integrated circuit, the capabilities of electronics have essentially doubled every eighteen months to two years. This is a phenomenon that has been called Moore’s Law, named after Gordon Moore (1929–), one of the cofounders of Intel. This has resulted in the rapid evolution of the computer into today’s powerful desktop and laptop machines. Engineers have played key roles in this evolution.

The development of the computer has dramatically affected engineering, as it has most of modern life. Computers are now used by engineers in all phases of their work, especially design and analysis. Computer-aided design (CAD) software is used to create designs, which can then be fabricated using computer-controlled machinery. Electrical engineers use CAD tools to design new computer and other circuits; the software allows engineers to manage the complexity of designing circuits that contain over one billion transistors. Computers are also used to analyze designs. For example, electrical engineers use computer simulators to verify that circuit designs will operate correctly. Mechanical and civil engineers use computer analysis tools to compute stresses and structures to ensure that the structures will not fail.

Computers have had an even greater effect on every aspect of typesetting. The advent of word processors and desktop publishing software have made it possible for most computer users to create documents that have many of the characteristics of typeset documents. Early word processors allowed a computer to create documents with the same output quality as that produced with a typewriter: all characters had the same width, and only one font was available. (The word processor did allow editing of content before the document was printed, which was a significant advance over the typewriter.) The complexity of word processors rapidly increased, and word processors implemented features such as variable width fonts, WYSIWYG (what you see is what you get), and printing to higher resolution output devices such as laser printers and inkjet printers. These features allowed users to create documents that looked quite similar to those that were professionally typeset; there are, however, many features of professionally typeset text that word processors cannot duplicate. Unfortunately, the limitations inherent in these programs has actually decreased the typesetting quality of much of the material that is printed today; the capabilities of computer programs to do typesetting are just beginning to approach the quality achievable by an expert typesetter.

The first powered airplane flight by the Wright Brothers in 1903 began a sequence of engineering and technical innovation that has led to today’s modern commercial and military aircraft. Significant advances along this path include

On June 7, 1995, the first Boeing 777 to carry paying passengers took off from London’s Heathrow airport. This milestone was the culmination of over six years of work and several billion dollars to develop and design the new airplane. The image (Figure below) shows a Boeing 777 landing. 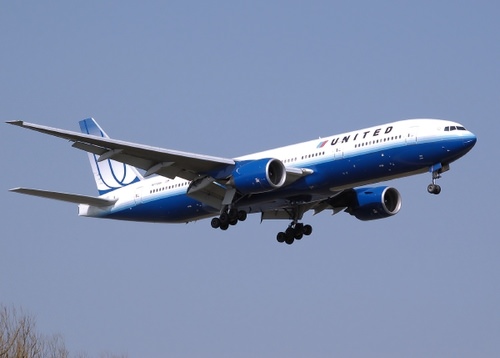 A Boeing 777 landing at Heathrow airport.

The development of the Boeing 777 began in the mid-1980s. At this time, Boeing customers (major airlines such as United, American, Delta, British Airways, etc.) indicated that they had needs that were not met by Boeing’s aircraft that were available at that time. Boeing considered modifying the design of the 767, but by 1989, it became apparent that this would not meet their customers’ needs. Thus, they began the development of a new airplane—the 777.

The 777 is one of the most complex airplanes ever engineered. It has over 130,000 different parts that are manufactured by hundreds of companies around the world. The design of the 777 broke new ground in many ways: it included significant customer involvement from the beginning, it used design build teams, CADD software was used extensively, and it included the implementation of Boeing’s first fly-by-wire system for a commercial airplane.

Another aspect of the 777 design process was the use of sophisticated CADD tools. Previous to the 777, as planes were designed, the design was verified with “mockups.” A mockup is a physical prototype whose purpose is to ensure everything fits together properly. So, for example, wire bundles and hydraulic lines were fitted to the mockup, and then had to be adjusted again when the first plane was assembled.

In the 777 design process, on the other hand, a sophisticated CADD system was used; the use of this system eliminated the need for most of the mockups, and the first 777 aircraft assembled could actually be flown. This system included two components. The first was Computer Graphics Aided Three-D Interface Application (CATIA), which was used to design every part. The second was Electronic Pre-Assembly In the Computer (EPIC), which was used to ensure that each designed part would fit properly with all of the other parts in the aircraft; the software discovered where, for example, a particular structural component would interfere with hydraulic lines. The CAD system allowed engineers to communicate their designs with each other across design-build teams to make sure that designs, as they were developed, were compatible with each other.

Not only was computer technology essential for the design of the 777, it is essential for the 777 control system, which is computer-based. In previous Boeing airliner designs, the pilots’ controls were connected by cables to hydraulic actuators that caused control surfaces to move. In contrast, in the 777 design, the pilots’ control movements are input to a computer system which determines electrical signals to send over wires to actuators. This fly-by-wire system saves significant cost and weight, but requires sophisticated and reliable computer systems to control the plane in response to the pilots’ inputs. The fly-by-wire system allows the 777 to be flown by a crew of only two (a pilot and a copilot); without the system, a much larger crew would be required. The image (Figure below) shows the cockpit of the Boeing 777. Development of the 777 fly-by-wire system required writing and debugging millions of lines of computer code. 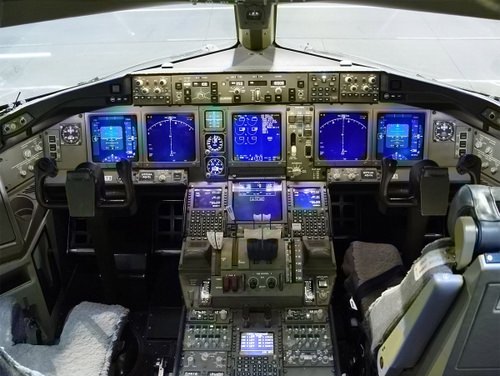 The cockpit of the Boeing 777. Note that most flight information is displayed on several computer operated displays.

The development of the 777 is another example of how advancing computer technology has dramatically changed the way engineers work. The use of CAD to capture designs and to simulate the structural and mechanical characteristics has dramatically reduced the time and expense associated with a design project. In addition, the use of computer networks to communicate design information has made it possible for engineers that are located in many different countries to collaborate on the same project.