Status has many meanings in the dictionary and also within sociology, but for now we will define it as the position that someone occupies in society. This position is often a job title, but many other types of positions exist: student, parent, sibling, relative, friend, and so forth. It should be clear that status as used in this way conveys nothing about the prestige of the position, to use a common synonym for status. A physician’s job is a status with much prestige, but a shoeshiner’s job is a status with no prestige.

Any one individual often occupies several different statuses at the same time, and someone can simultaneously be a banker, Girl Scout troop leader, mother, school board member, volunteer at a homeless shelter, and spouse. This someone would be very busy! We call all the positions an individual occupies that person’s status set (see Figure 4.1.1 "Example of a Status Set").

Sociologists usually speak of three types of statuses. The first type is ascribed status, which is the status that someone is born with and has no control over. There are relatively few ascribed statuses; the most common ones are our biological sex, race, parents’ social class and religious affiliation, and biological relationships (child, grandchild, sibling, and so forth).

The second kind of status is called achieved status, which, as the name implies, is a status you achieve, at some point after birth, sometimes through your own efforts and sometimes because good or bad luck befalls you. The status of student is an achieved status, as is the status of restaurant server or romantic partner, to cite just two of the many achieved statuses that exist. (college student, movie star, teacher, or athlete). 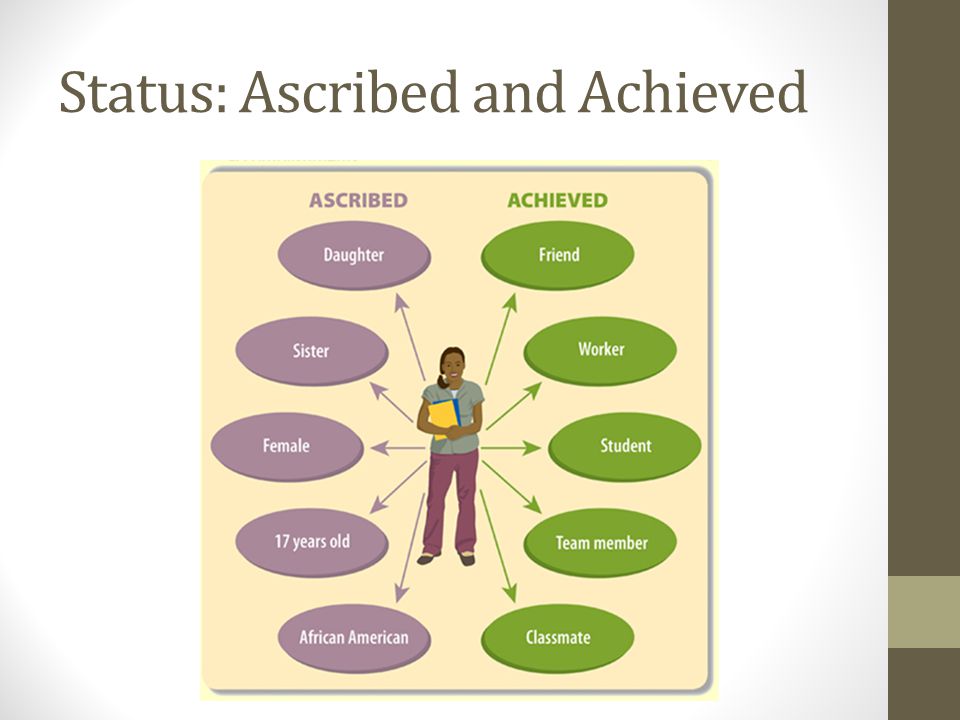 Some master statuses have negative consequences. To recall the medical student and nursing home news story that began this chapter, a physical disability often becomes such a master status. If you are bound to a wheelchair, for example, this fact becomes more important than the other statuses you have and may prompt people to perceive and interact with you negatively. In particular, they perceive you more in terms of your master status (someone bound to a wheelchair) than as the “person beneath” the master status, to cite Matt’s words. For similar reasons, gender, race, and sexual orientation may also be considered master statuses, as these statuses often subject women, people of color, and gays and lesbians, respectively, to discrimination and other problems, no matter what other statuses they may have.

Whatever status we occupy, certain objects signify any particular status. These objects are called status symbols. In popular terms, status symbol usually means something like a Rolls-Royce or BMW that shows off someone’s wealth or success, and many status symbols of this type exist. But sociologists use the term more generally than that. For example, the wheelchair that Matt the medical student rode for 12 days was a status symbol that signified his master status of someone with a (feigned) disability. If someone is pushing a stroller, the stroller is a status symbol that signifies that the person pushing it is a parent or caretaker of a young child.

Whatever its type, every status is accompanied by a role, which is the behavior expected of someone—and in fact everyone—with a certain status. You and most other people reading this book are students. Despite all the other differences among you, you have at least this one status in common. As such, there is a role expected of you as a student (at least by your professors); this role includes coming to class regularly, doing all the reading assigned from this textbook, and studying the best you can for exams. Roles for given statuses existed long before we were born, and they will continue long after we are no longer alive. A major dimension of socialization is learning the roles our society has and then behaving in the way a particular role demands.

Because roles are the behavior expected of people in various statuses, they help us interact because we are familiar with the roles in the first place, a point to which the second half of this chapter returns. Suppose you are shopping in a department store. Your status is a shopper, and the role expected of you as a shopper—and of all shoppers—involves looking quietly at various items in the store, taking the ones you want to purchase to a checkout line, and paying for them. The person who takes your money is occupying another status in the store that we often call a cashier. The role expected of that cashier—and of all cashiers not only in that store but in every other store—is to accept your payment in a businesslike way and put your items in a bag. Because shoppers and cashiers all have these mutual expectations, their social interaction is possible.

Whatever its type, every status is accompanied by a role, which is the behavior expected of someone—and in fact everyone—with a certain status. You and most other people reading this book are students. Despite all the other differences among you, you have at least this one status in common. As such, there is a role expected of you as a student (at least by your professors): this role includes coming to class regularly, doing all the reading assigned from this textbook, and studying the best you can for exams.

Roles can help our interactions run smoothly and automatically and, for better or worse, shape our personalities, but they can also cause various kinds of problems. One such problem is role conflict, which occurs when the roles of our many statuses conflict with each other. For example, say you are a student and also a parent. Your 3-year-old child gets sick. You now have a conflict between your role as a parent and your role as a student. To perform your role as a parent, you should stay home with your sick child. To perform your role as a student, you should go to your classes and take the big exam that had been scheduled weeks ago. What do you do? Obviously, you cannot perform both roles at the same time. To resolve role conflict, we ordinarily have to choose between one role or the other, which is often a difficult choice to make. In this example, if you take care of your child, you miss your classes and exam; if you go to your classes, you have to leave your child at home alone, an unacceptable and illegal option.

Another way to resolve role conflict is to find some alternative that would meet the needs of your conflicting roles. In our sick child example, you might be able to find someone to watch your child until you can get back from classes. It is certainly desirable to find such alternatives, but, unfortunately, they are not always forthcoming. If role conflict becomes too frequent and severe, a final option is to leave one of your statuses altogether. In our example, if you find it too difficult to juggle your roles as parent and student, you could stop being a parent—hardly likely!—or, more likely, take time off from school until your child is older. Most of us in these circumstances would try our best to avoid having to do this. Another role-related problem is called role strain. Here you have one status, and a role associated with it, that is causing problems because of all the demands coming to you from people in other statuses with which your own status is involved. Suppose you were a high school principal. In your one role as a principal, you come into contact with people in several different statuses: teachers, students, custodial and support staff, the superintendent, school board members, the community as a whole, and the news media. These statuses may make competing demands on you in your one role as a principal. If your high school has a dress code, for example, the students may want you to abolish it, the teachers and superintendent may want you to keep it, and maybe the school board would agree with the students. As you try to please all of these competing factions, you certainly might experience some role strain!

A third type of role problem occurs when we occupy a status whose role demands a certain type of personality that differs from the one we actually have. Can you imagine a police officer who was afraid of guns? An athlete who was not competitive? Although most people avoid this type of role problem by not taking on a role to which their personality is ill suited, such problems occur nonetheless. For example, some people who dislike children and do not have the patience to be good parents end up being parents anyway. In another example, your author once knew a new professor who was woefully nervous lecturing in front of students. You might wonder why he became a professor in the first place, but he probably just loved the subject matter so much that he thought he would overcome his nervousness. He did not.

Another consideration about groups and our roles in them is the fact that one single role can place a rather heavy burden on you (IE: student). Role Strain is the burden one feels within any given role. And when one role comes into direct conflict with another or other roles you might experience Role Conflict includes conflict and burdens one feels because the expectations of one role compete with the expectations of another role.

For many of the social issues confronting the United States today—hate crimes, other crimes, violence against women, sexism, racism, and so forth—it might not be an exaggeration to say that new patterns of socialization are ultimately necessary if our society wants to be able to address these issues effectively. Parents of young children and adolescents bear a major responsibility for making sure our children do not learn to hate and commit harm to others, but so do our schools, mass media, and religious bodies. No nation is perfect, but nations like Japan have long been more successful than the United States in raising their children to be generous and cooperative. Their examples hold many good lessons for the United States to follow.