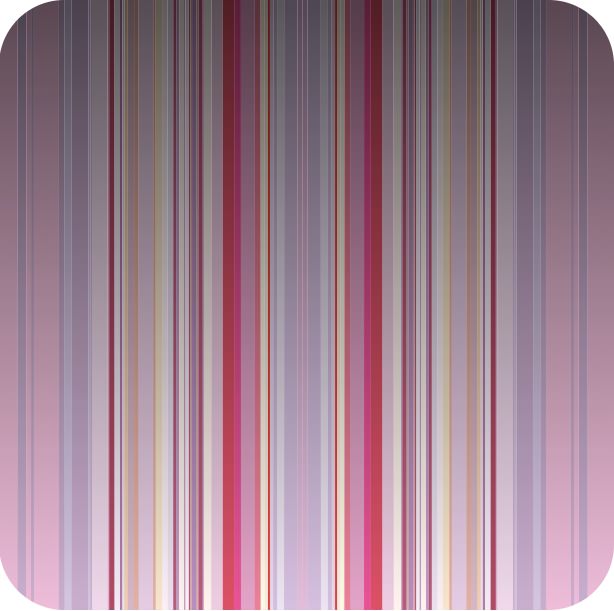 What causes the strange stripes on the seafloor?

Magnetometers in the oceans discovered strange patterns. This pattern of stripes is like what they discovered on the seafloor. In this image, there is a dusky purple stripe in the center. Other colored stripes are symmetrical about the dusky purple stripe. In the oceans, magnetic stripes are symmetrical about a mid-ocean ridge axis. What does this have to do with continental drift?

Looking at the magnetism of the seafloor, scientists discovered something astonishing. Many times in Earth’s history, the magnetic poles have switched positions. North becomes south, and south becomes north! When the north and south poles are aligned as they are now, geologists say it is normal polarity. When they are in the opposite position, they say that it is reversed polarity.

Scientists were even more surprised to discover a pattern of magnetism on the seafloor. There are stripes with different magnetism. Some stripes have normal polarity and some have reversed polarity. These stripes surround the mid-ocean ridges. There is one long stripe with normal magnetism at the top of the ridge. Next to that stripe are two long stripes with reversed magnetism. One is on either side of the normal stripe. Next come two normal stripes and then two reversed stripes, and so on across the ocean floor. The magnetic stripes end abruptly at the edges of continents. Sometimes the stripes end at a deep sea trench (Figure below). 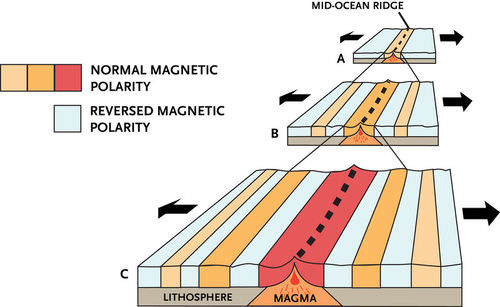 Scientists found that magnetic polarity in the seafloor was normal at mid-ocean ridges but reversed in symmetrical patterns away from the ridge center. This normal and reversed pattern continues across the seafloor.

Magnetometers are still towed behind research ships. They continue to map the magnetism of the seafloor.

Different seafloor magnetic stripes equal different ages. By using geologic dating techniques, scientists could figure out what these ages are. They found that the youngest rocks on the seafloor were at the mid-ocean ridges. The rocks get older with distance from the ridge crest. Scientists were surprised to find that the oldest seafloor is less than 180 million years old. This may seem old, but the oldest continental crust is around 4 billion years old. 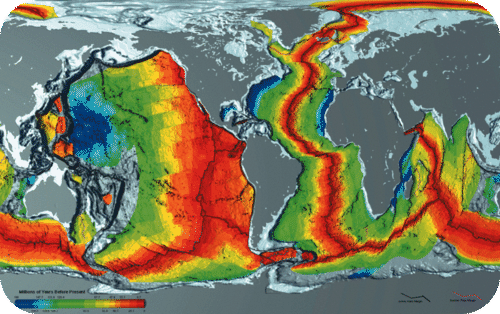 Seafloor is youngest near the mid-ocean ridges and gets progressively older with distance from the ridge. Orange areas show the youngest seafloor. The oldest seafloor is near the edges of continents or deep sea trenches.

This leads to an important idea: some process is creating seafloor at the ridge crest. Somehow the older seafloor is being destroyed. Finally, we get to the mechanism for continental drift.