How do the continents move?

Harry Hess was a geology professor and a naval officer. He commanded an attack transport ship during WWII. Hess was intrigued by the seafloor maps produced with the ship's echo sounder. He thought about all of the evidence for continental drift. He thought about all of the unusual features of the seafloor. And he found the mechanism to explain them all.

The Evidence Comes Together

Scientists needed to explain these observations.

Not long after Wegener's death, scientists recognized that there is convection in the mantle. Deeper material is hotter and so it rises. Near the surface, it becomes cooler and denser so it sinks. This creates a convection cell in the mantle.

After the war, Harry Hess put together the ideas and evidence he needed. Hess resurrected Wegener's continental drift hypothesis. He reviewed the mantle convection idea. He thought about the bathymetric features and the patterns of magnetic polarity on the seafloor. In 1962, Hess published a new idea that he called seafloor spreading.

Hess wrote that hot magma rises up into the rift valley at the mid-ocean ridges. The lava cools to form new seafloor. Later more lava erupts at the ridge. The new lava pushes the seafloor horizontally away from the ridge axis (Figure below). The seafloor moves!

Magnetite crystals in the lava point in the direction of the magnetic north pole. The different stripes of magnetic polarity reveal the different ages of the seafloor. 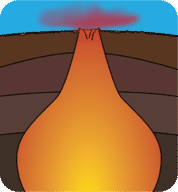 The flat topped guyots were once active volcanoes that were above sea level. They were eroded at their tops. As the seafloor moved away from the ridge, the crust sank deeper. The tops of the guyots went below sea level.

The Mechanism for Continental Drift

Seafloor spreading is the mechanism that Wegener was looking for! Convection currents within the mantle drive the continents. The continents are pushed by oceanic crust, like they are on a conveyor belt. Over millions of years the continents move around the planet’s surface. The spreading plate takes along any continent that rides on it.