What do you see when oceanic lithosphere subducts?

At a convergent plate boundary, when one plate is oceanic, there are large volcanoes. These volcanoes are found in lines that outline the subduction zone. Earthquakes also happen in these zones. The Aleutian Islands that border southern Alaska are an island arc. In this winter image from space, the volcanoes are covered with snow.

A convergent plate boundary forms where two plates collide. That collision can happen between a continent and oceanic crust, between two oceanic plates, or between two continents. Oceanic crust is always destroyed in these collisions. 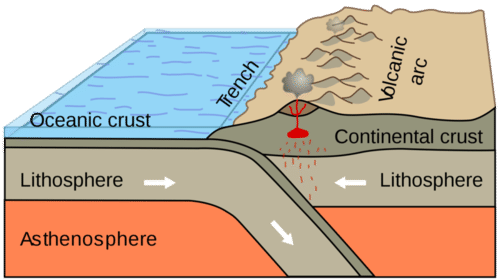 Subduction of an oceanic plate beneath a continental plate forms a line of volcanoes known as a continental arc and causes earthquakes.

As you would expect, where plates collide there are lots of intense earthquakes and volcanic eruptions. The subducting oceanic plate melts as it reenters the mantle. The magma rises and erupts. This creates a volcanic mountain range near the coast of the continent. This range is called a continental arc. The Andes Mountains, along the western edge of South America, are a volcanic arc (Figure below).

Two oceanic plates may collide. In this case, the older plate is denser. This plate subducts beneath the younger plate. As the subducting plate is pushed deeper into the mantle, it melts. The magma this creates rises and erupts. This forms a line of volcanoes, known as an island arc (Figure below). Japan, Indonesia, the Philippine Islands, and the Aleutian Islands of Alaska are examples of island arcs (Figure below). 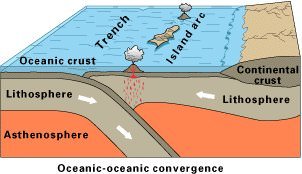 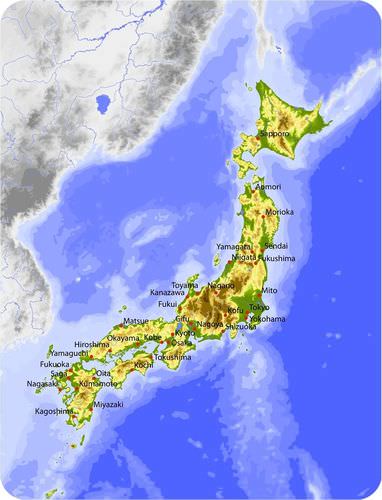 The country of Japan is an island arc that lies at the intersection of the North American, Filipino, and Eurasian plates. Colors in this picture indicate elevation.