What do you see in this satellite photo?

We continue our trip up western North America to find a convergent plate boundary where oceanic crust subducts beneath oceanic crust. North of the contiguous U.S. lies Canada, and north of Canada lies Alaska. A line of volcanoes, known as the Aleutian Islands, is the result of ocean-ocean convergence. In this satellite image is an erupting volcano, topped by snow or ice, and surrounded by seawater - a member of the Aleutian chain. Let’s take a look at this boundary and the volcanic arc.

When two plates converge, what happens depends on the types of lithosphere that meet. We explored what happens when oceanic crust meets continental crust. Another type of convergent plate boundary is found where two oceanic plates meet. In this case the older, denser slab of oceanic crust will plunge beneath the less dense one.

The features of a subduction zone where an oceanic plate subducts beneath another oceanic plate are the same as a continent-ocean subduction zone. An ocean trench marks the location where the plate is pushed down into the mantle. In this case, the line of volcanoes that grows on the upper oceanic plate is an island arc. Do you think earthquakes are common in these regions (Figure below)? 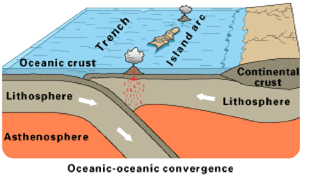 Subduction of an ocean plate beneath other oceanic crust results in a volcanic island arc, an ocean trench, and many earthquakes

In the north Pacific, the Pacific Plate is subducting beneath the North American Plate just as it was off of the coast of the Pacific Northwest. The difference is that here the North American plate is covered with oceanic crust. Remember that most plates are made of different types of crust. This subduction creates the Aleutian Islands, many of which are currently active (see Figure below). Airplanes sometimes must avoid flying over these volcanoes for fear of being caught in an eruption. 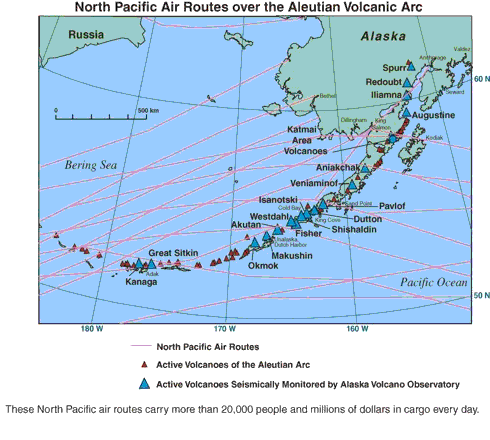 The island arc that is the Aleutian Islands is easily seen in this map of North Pacific air routes over the region.