What folds can you see?

Moving around the desert Southwest, we see a lot of folds. This view is near the Valley of the Gods in Utah. Can you see all of the types of folds mentioned below? All of the folds mentioned in the text below are found in the arid Southwestern U.S.

Deep within the crust, as plates collide, rocks crumple into folds. You can model these folds by placing your hands on opposite edges of a piece of cloth and pushing your hands together. Your hands moving toward each other creates compressive stress. In sedimentary rocks, you can easily trace the folding of the layers (Figure below). In the image below, the rock layers are no longer horizontal. They tilt downhill from right to left in a monocline. Once rocks are folded, they do not return to their original shape.

This is a geologic cross section of the Grand Staircase in Utah. Where the rocks fold up, at the left of the diagram, is a small syncline.

There are three types of folds: monoclines, anticlines, and synclines.

A monocline is a simple “one step“ bend in the rock layers (Figure below). In a monocline, the oldest rocks are at the bottom, and the youngest are at the top. 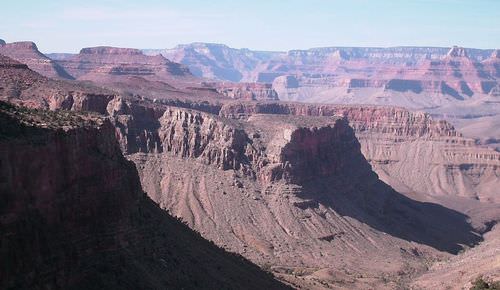 The rock layers in the center left are tilted in one direction, forming a monocline.

(A) A syncline is a concave downward fold. (B) This syncline is seen at Calico Ghost Town near Barstow, California.