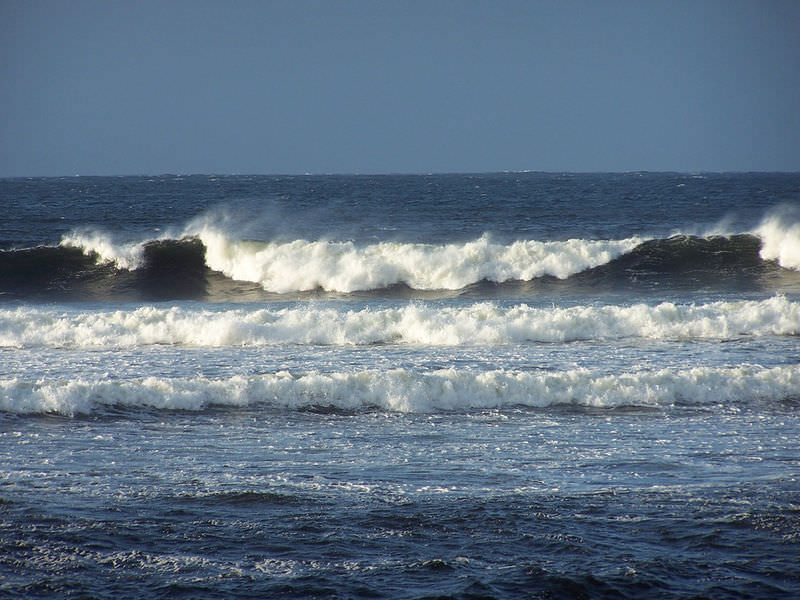 Yes, in some ways. Ocean waves travel at the interface between the sea surface and the atmosphere. They have all the features that all waves have. Some seismic waves also travel at an interface. Which ones?

Seismic waves are just one type of wave. Sound and light also travel in waves. Every wave has a high point called a crest and a low point called a trough. The height of a wave from the center line to its crest is its amplitude. The horizontal distance between waves from crest to crest (or trough to trough) is its wavelength (Figure below).

The energy from earthquakes travels in waves, such as the one shown in this diagram.

P-waves are faster. They travel at about 6 to 7 kilometers (about 4 miles) per second. Primary waves are so named because they are the first waves to reach a seismometer. P-waves squeeze and release rocks as they travel. The material returns to its original size and shape after the P-wave goes by. For this reason, P-waves are not the most damaging earthquake waves. P-waves travel through solids, liquids, and gases.

S-waves are slower than P-waves. They are the second waves to reach a seismometer. S-waves move up and down. They change the rock’s shape as they travel. S-waves are about half as fast as P-waves, at about 3.5 km (2 miles) per second. S-waves can move only through solids. This is because liquids and gases don’t resist changing shape. 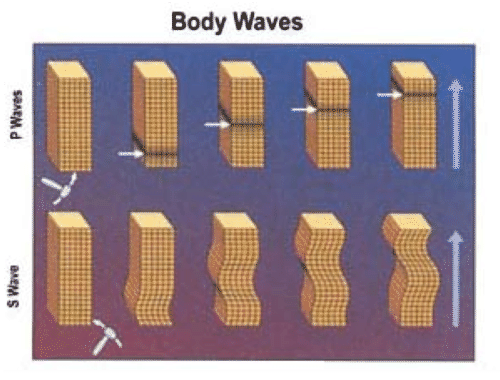 P-waves and S-waves are the two types of body waves. 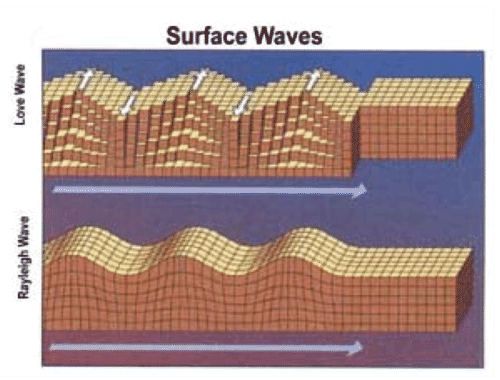 Love waves and Rayleigh waves are the two types of surface waves.

Surface waves travel along the ground outward from an earthquake’s epicenter. Surface waves are the slowest of all seismic waves. They travel at 2.5 km (1.5 miles) per second. There are two types of surface waves. Love waves move side-to-side, much like a snake. Rayleigh waves produce a rolling motion as they move up and backward (Figure above). Surface waves cause objects to fall and rise. They also cause objects to sway back and forth. These motions cause damage to rigid structures during an earthquake.