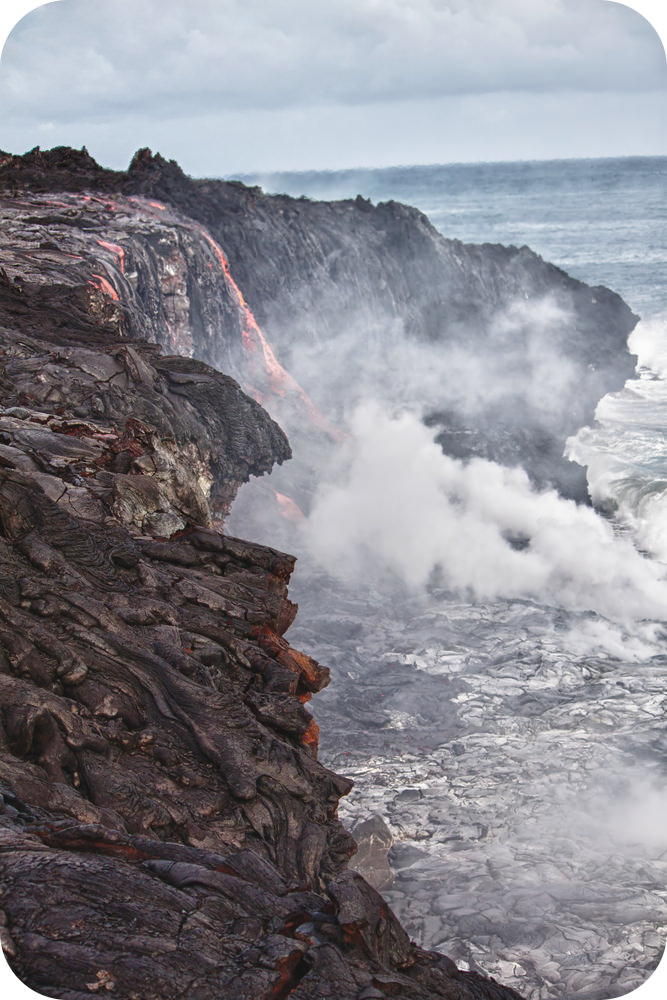 The Hawaiian Islands are formed from a hotspot beneath the Pacific Ocean. Volcanoes grow above the hotspot. Lava flows down the hillsides, and some of it reaches the ocean, causing the islands to grow. Too hot now, but a great place in the future for beach lovers!

Some volcanoes form over active hotspots. Scientists count about 50 hotspots on the Earth. Hotspots lie directly above a column of hot rock called a mantle plume. Mantle plumes continuously bring hot rock up from the mantle toward the crust (Figure below). The rock melts due to the release of pressure. 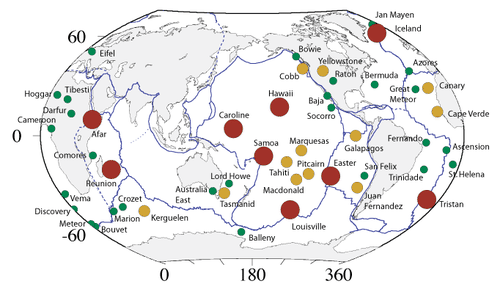 Mantle plumes are found all over the world, especially in the ocean basins. The size of the eruptions is different at different plumes.

Hotspots may be in the middle of a tectonic plate. They create intraplate volcanoes.

Hotspots are much more common beneath ocean crust. This is because ocean crust is thinner. The plume can more easily penetrate this crust. As the tectonic plates move above a hotspot, they form a chain of volcanoes. The islands of Hawaii formed over a hotspot in the middle of the Pacific plate. The volcanoes are massive shield volcanoes that together create the islands. The lavas are mafic and have low viscosity. These lavas produce beautiful ropy flows of pāhoehoe and clinkery flows of a'a. These lava types will be described in more detail in the concept Effusive Eruptions.

The Hawaii hotspot has been active for tens of millions of years. The volcanoes of the Hawaiian Islands formed at this hotspot. Older volcanoes that formed at the hotspot have eroded below sea level. These are called the Emperor Seamounts.

Loihi seamount is currently active beneath the water southeast of the Big Island of Hawaii. One day, the volcano will rise above sea level. Loihi will join the volcanoes of the island or create a new island (Figure below). 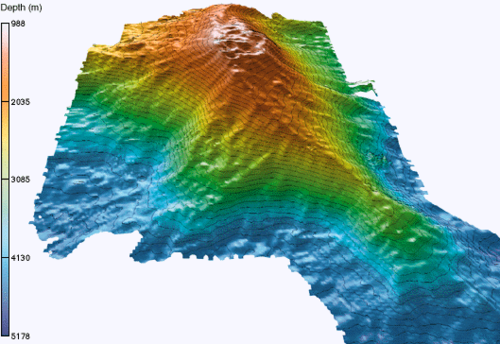 A bathymetric map of Loihi seamount. Loihi will be the next shield volcano in the Hawaiian-Emperor chain.

A hotspot beneath Hawaii, the origin of the voluminous lava produced by the shield volcano Kilauea can be viewed in this video.

Hotspots may also be active at plate boundaries. This is especially common at mid-ocean ridges. Iceland is formed by a hotspot along the Mid-Atlantic Ridge.

Hotspots are found within continents, but not as commonly as within oceans. They are not common because it takes a massive mantle plume to penetrate the thick continental crust. Eruptions from these hotspots are rare but massive. The Yellowstone hotspot is a famous example of a continental hotspot.