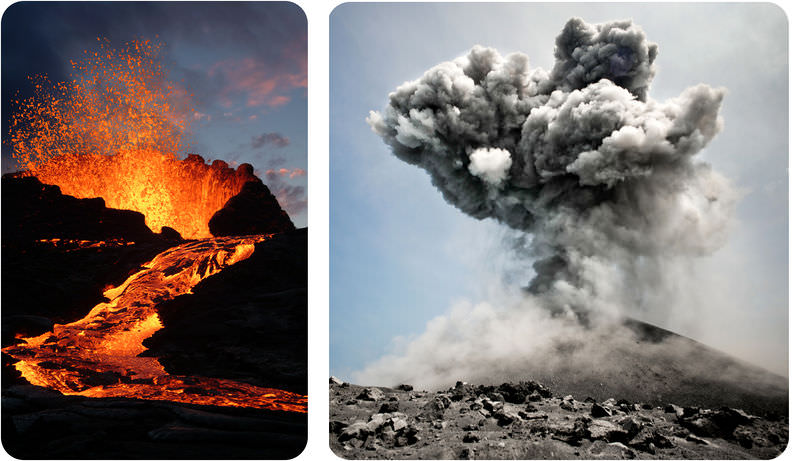 Are all volcanic eruptions alike?

Magma forms deep beneath the Earth’s surface. Rock melts below the surface under tremendous pressure and high temperatures. Molten rock flows like taffy or hot wax. Most magmas are formed at temperatures between 600oC and 1300oC (Figure below). 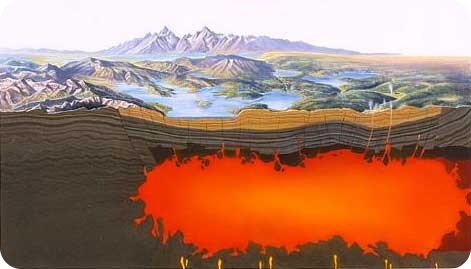 Magma beneath a volcano erupts onto the volcano’s surface. This image is of a magma chamber underlying Yellowstone.

Magma collects in magma chambers beneath Earth’s surface. Magma chambers are located where the heat and pressure are great enough to melt rock. These locations are at divergent or convergent plate boundaries or at hotpots.

The chemistry of a magma determines the type of igneous rock it forms. The chemistry also determines how the magma moves. The higher the amount of silica in the magma, the higher the viscosity. Viscosity is a liquid's resistance to flow. Viscous magmas tend to stay below the surface or erupt explosively. These are felsic magmas, which are high in silica. When magma is fluid and runny, it is not viscous. This magma often reaches the surface by flowing out in rivers of lava. These are low-silica mafic magmas.

The way lava flows depends on what it is made of. Thick lava doesn’t flow easily. It may block the vent of a volcano. If the lava traps a lot of gas, the pressure builds up. After the pressure becomes greater and greater, the volcano finally explodes. Ash and pyroclasts shoot up into the air. Pumice, with small holes in solid rock, shows where gas bubbles were when the rock was still molten.

Fluid lava flows down mountainsides. The rock that the flow becomes depends on which type of lava it is and where it cools. The three types of flows are a’a, pāhoehoe, and pillow lava.

A'a flows can be found in Hawaii and are much sharper and more jagged than pāhoehoe.

Ropy pahoehoe flows are common on Kilauea Volcano in Hawaii. 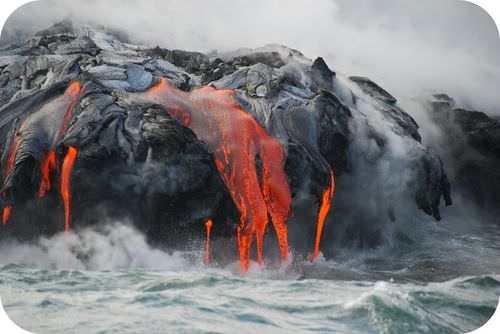 Lava erupting in the water can form bulbous, pillowy forms.