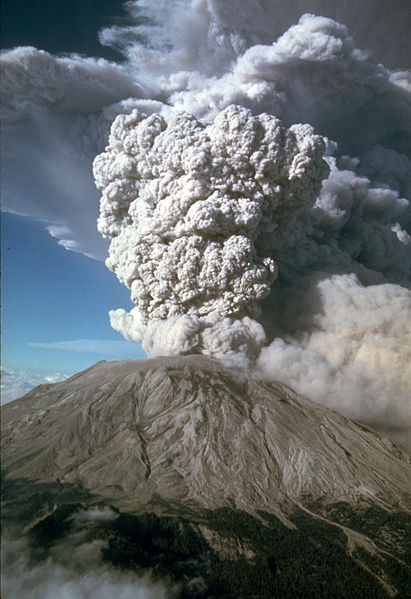 What would cause a giant explosion like this one?

All volcanoes share the same basic features. First, mantle rock melts. The molten rock collects in magma chambers that can be 160 kilometers (100 miles) beneath the surface. As the rock heats, it expands. The hot rock is less dense than the surrounding rock. The magma rises toward the surface through cracks in the crust. A volcanic eruption occurs when the magma reaches the surface. Lava can reach the surface gently or explosively.

An explosive eruption produces huge clouds of volcanic ash. Chunks of the volcano fly high into the atmosphere. Explosive eruptions can be tens of thousands of times as powerful as an atomic bomb (Figure below). Hot magma beneath the surface mixes with water. This forms gases. The gas pressure grows until it must be released. The volcano erupts in an enormous explosion. 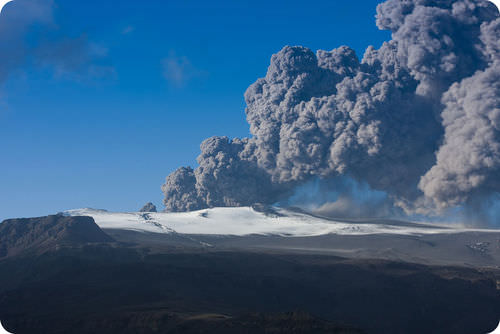 Eyjafjallajökull volcano in Iceland spewed ash into the atmosphere in 2010. This was a fairly small eruption, but it disrupted air travel across Europe for six days.

Ash and particles shoot many kilometers into the sky. The material may form a mushroom cloud, just like a nuclear explosion. Hot fragments of rock, called pyroclasts, fly up into the air at very high speeds. The pyroclasts cool in the atmosphere. Some ash may stay in the atmosphere for years. The ash may block out sunlight. This changes weather patterns and affects the temperature of the Earth. For a year or two after a large eruption, sunsets may be especially beautiful worldwide.

Volcanic gases can form poisonous, invisible clouds. The poisonous gases may be toxic close to the eruption. The gases may cause environmental problems like acid rain and ozone destruction.

In 1980, Mount St. Helens, located between Portland, Oregon and Seattle, Washington, erupted explosively. The eruption killed 57 people, destroyed 250 homes, and swept away 47 bridges. The volcano blew off its top so that it lost over 400 meters (1,300 feet) of height. Mt. St. Helens is still active (Figure below). Within the crater, a new lava dome formed.

(A) Mount St. Helens eruption on May 18, 1980. Mt. Adams is in the background on the right. (B) The eruption of Mt. St. Helens blew down acres of trees like they were toothpicks.

Lahars are mixtures of ash and water that travel down river valleys. On Mount St. Helens, the eruption melted glaciers. The water mixed with ash from the eruption and created tremendous lahars. The lahars raced down valleys and knocked out many bridges.

Mt St. Helens was not a very large eruption for the Cascades. Mt. Mazama blew itself apart in an eruption about 42 times more powerful than Mount St. Helens in 1980. Today all that remains of that huge stratovolcano is Crater Lake (Figure below and Figure below). 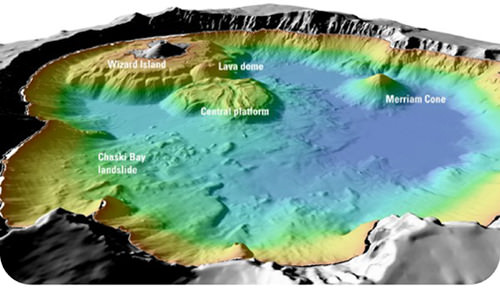 Crater Lake fills the caldera of the collapsed Mt. Mazama. The bathymetry of the lake shows volcanic features such as cinder cones.