Which large rainstorms are crucial for people in some parts of the world?

India, Pakistan, and other nations in southern Asia are great places to go to see monsoon rains. The region depends on the water they bring. Parts of the Southwestern United States also receive monsoon rains. These rains break the summer heat. They also provide water to desert plants. With winter rains and summer rains, these deserts are more lush than many.

Local winds are winds that blow over a limited area. Local winds blow between small low and high pressure systems. They are influenced by local geography. Nearness to an ocean, lake, or mountain range can affect local winds. Some examples are found below. Local winds can affect the weather and climate of a region. 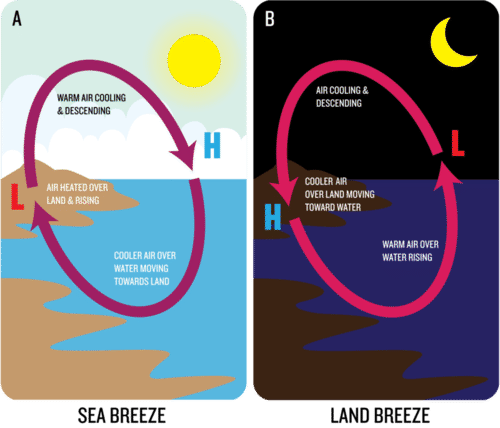 Land and sea breezes blow because of daily differences in heating.

Monsoons are like land and sea breezes, but on a larger scale. They occur because of seasonal changes in the temperature of land and water. In the winter, they blow from land to water. In the summer, they blow from water to land. In regions that experience monsoons, the seawater offshore is extremely warm. The hot air absorbs a lot of the moisture and carries it over the land. Summer monsoons bring heavy rains on land. Monsoons occur in several places around the globe. The most important monsoon in the world is in southern Asia (Figure below). These monsoons are important because they carry water to the many people who live there.

Katabatic winds move the same way as mountain and valley breezes. However, they are much stronger. Katabatic winds form over a high plateau that is surrounded by mountains. In winter, the plateau grows cold. Air sinks through the gaps in the mountains. Over Antarctica and Greenland, these winds are frigid.

Chinook winds (Figure below) occur when air is forced over a mountain range. Warm air rises over the Sierra Nevada in California, for example, because it is pushed eastward by the westerly winds. The air cools as it rises and precipitates. The air is now dry. It sinks down the far side of the mountains and may create strong winds. These Chinook winds are relatively warm. If there is snow, the winds may melt it quickly. The dry sinking air creates a rainshadow effect. Rainshadow effect is responsible for many of the world's deserts. 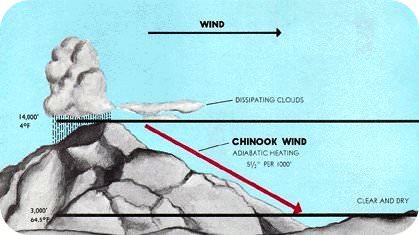 As air rises over a mountain it cools and loses moisture. The air warms by compression on the leeward side. The resulting warm and dry winds are Chinook winds. The leeward side of the mountain experiences rainshadow effect.

Santa Ana winds (Figure below) are responsible for many large fires in Southern California (Figure below). The Santa Ana winds arrive at the end of California’s long summer drought season. Air east of the Sierra Nevada Mountains cools in late fall. This creates a high pressure zone. The air is then forced downhill through the deserts of the Southwest. It blows westward toward the ocean. The air is blocked by the San Gabriel and San Bernardino Mountains. So it is funneled rapidly through the mountain passes. If a fire starts, it spreads quickly. The result is large-scale devastation. Long-term drought conditions and strong Santa Ana winds have fueled many destructive fires in Southern California including in recent years including in 2017, which saw 25 ongoing wildfires all the way into December. 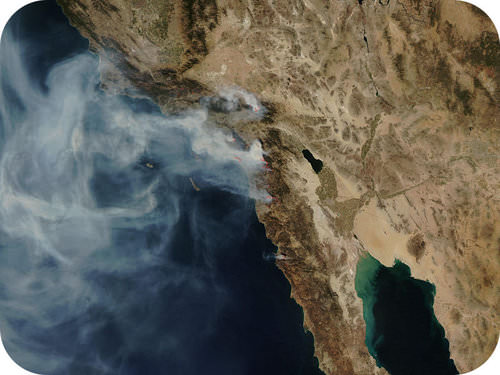 The winds are especially fast through Santa Ana Canyon, for which they are named. Santa Ana winds blow dust and smoke westward over the Pacific from Southern California. 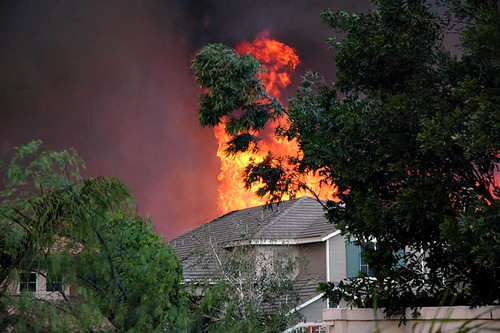 In October 2007, Santa Ana winds fueled many fires that together burned 426,000 acres of wild land and more than 1,500 homes in Southern California.

High summer temperatures on the desert create high winds and monsoon storms. Strong winds in the desert can pick up dust and blow it around. A dust storm known as a haboob (Figure below) forms in the downdrafts on the front of a thunderstorm.

A haboob in the Phoenix metropolitan area, Arizona.