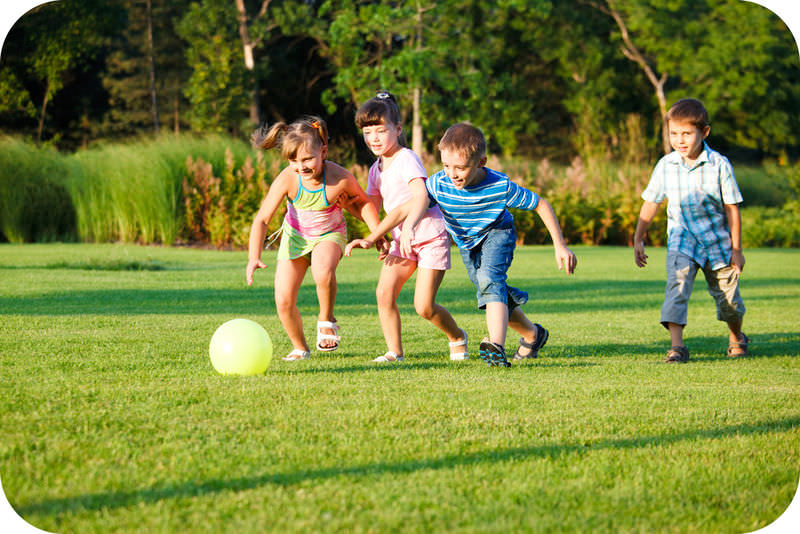 Why can't the children in Punta Arenas go outside to play in the spring?

Punta Arenas, Chile, is the world's southernmost city. At such a high latitude, winters are exceedingly cold and dark. Unlike the children pictured above, the children in Punta Arenas must stay inside to avoid the cold. Of course, they look forward to spring when they can go out to play. But some years, it is too dangerous for the children to go outside. The ozone hole has moved north. Too much of the Sun's harmful UV radiation gets through.

Ozone near the ground harms human health. Ground-level ozone is a pollutant. But the ozone layer in the stratosphere protects us from harmful solar rays. That’s why people were alarmed in the 1980s to learn that there was a hole in the ozone layer.

Cause of Ozone Loss

What’s destroying the ozone layer? The chief cause is chlorofluorocarbons (CFCs). These are human-made chemicals that contain the element chlorine (Cl). In the past, CFCs were widely used in spray cans, refrigerators, and many other products. CFCs are stable compounds that can remain in the atmosphere for hundreds of years.

Once CFCs are in the air, they float up into the stratosphere. What happens next is pictured below (Figure below). Sunlight breaks apart the molecules. This releases their chlorine ions (Cl). The free chlorine ions may then combine with oxygen ions in ozone. This breaks down the ozone molecules into an oxygen molecule and an oxygen ion. One CFC molecule can break down as many as 100,000 ozone molecules in this way! These forms of oxygen do not protect the planet from ultraviolet radiation. 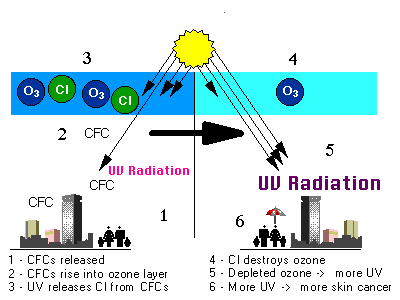 CFCs break down ozone in the stratosphere. 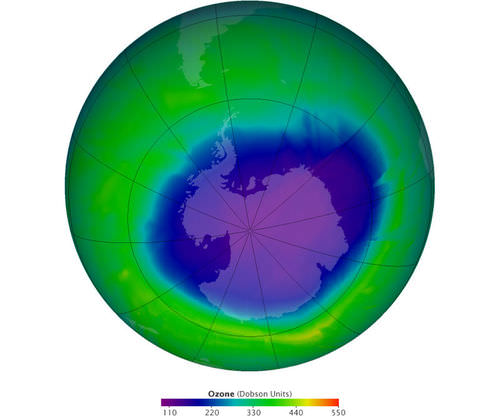 The Montreal Protocol is a worldwide agreement on air pollution. It focuses on CFCs. It was signed by many countries in 1987. It controls almost 100 chemicals that can damage the ozone layer. Its aim is to return the ozone layer to its normal state.

The Montreal Protocol has been effective in controlling CFCs. By 1995, few CFCs were still being used. But the ozone hole kept growing for several years after that because of the CFCs already in the atmosphere. It peaked in 2006. Since then, it has been somewhat smaller. The Montreal Protocol is a shining example of how nations can come together to solve a global environmental problem.