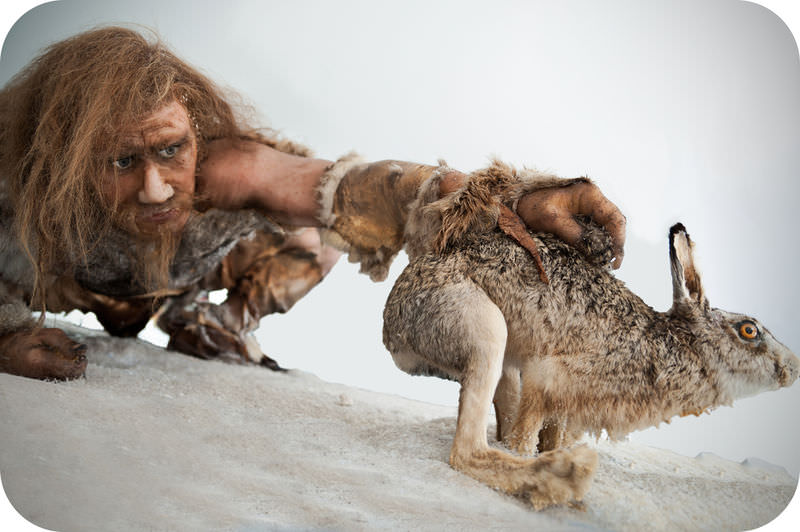 How important was the Pleistocene ice age to human evolution?

Climate is dynamic; climate has changed through Earth's history. Climate has changed a lot during the time humans have been evolving. As the climate got colder, people learned to hunt more since plants became scarce in the winter. Better hunting required better tools. Better tools helped to spur on the evolution of culture.

Earth’s climate has changed many times through Earth's history. Over much of Earth’s past, the climate was warmer than it is today. Picture in your mind dinosaurs roaming the land. They're probably doing it in a pretty warm climate (Figure below)!

Dinosaurs thrived during one of the warmest periods in Earth's history.

But ice ages also occurred many times in the past. An ice age is a period when temperatures are cooler than normal. This causes glaciers to spread to lower latitudes. Scientists think that ice ages occurred at least six times over the last billion years alone. How do scientists learn about Earth’s past climates?

The last major ice age took place in the Pleistocene. This epoch lasted from 2 million to 14,000 years ago. Earth’s temperature was only 5° C (9° F) cooler than it is today. But glaciers covered much of the Northern Hemisphere. Below, you can see how far south they went (Figure below). Clearly, a small change in temperature can have a big impact on the planet. Humans lived during this ice age.

Pleistocene glaciers covered an enormous land area. Chicago is just one city that couldn't have existed during the Pleistocene.

This video deals with the time period at the end of the Paleozoic, called the Permian, 250,000,000 years ago. At that time there was a great mass extinction. Since it was so long ago, scientists must use many types of evidence to determine its cause.