How did dark deer mice become lighter over time?

A species changes color over time if its environment changes. Many other types of changes can take place, too. The darker deer mice evolved into the lighter deer mice in some locations. What do you think changed about the environment?

Organisms alive today evolved from earlier life forms. We can learn about this from fossils. For example, horse fossils from 60 million years ago are very different from modern horses. Ancient horses were much smaller than they are today (Figure below). The horses’ teeth and hooves have also changed. The horses evolved because of changes in their environment. 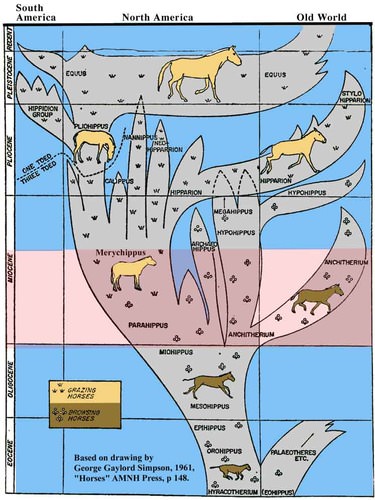 Ancient horses were quite different from present-day horses.

Evolution happens because of natural selection. Good traits become more common in a population. Bad traits become less common. The deer mouse, species Peromyscus maniculatus gives an example of evolution by natural selection. In Nebraska, this mouse is typically brown. But in places where glaciers dropped lighter sand over the darker soil, the mice are light. Why? Because predators could more easily spot the dark mice on light sand. The lighter mice were more likely to survive and have offspring. Natural selection favored the light mice. Over time, the population became light colored. Enough changes may take place over time that the two types of mice become different species.