Do these animals look familiar?

The ice ages were very recent as Earth history goes. The animals are familiar, but they're still very different from modern ones. For one thing, most of them were huge. A small surface area-to-volume ratio is better for keeping warm (less surface area to lose thermal energy). Although the dominant animals were mammals, the Pleistocene Earth still does not look quite modern.

The Cenozoic Era is going on right now! It is the age of mammals. The Cenozoic began with the extinction of every land creature larger than a dog. This left many niches open. Organisms evolved to fill them.

There was a huge radiation of mammals. But birds, like the few seen in the pictures (Figure below), are more common and even more diverse. Both mammals and birds have the ability to regulate their own body temperature. They are endotherms (warm blooded). This was an advantage since Earth’s climate went through sudden and dramatic changes.

Left: A pelican, catching a fish. Center: A hummingbird, taking a sip from a flower. Right: A falcon, ready to catch its prey.

Diversification of the Mammals

Mammals have adapted to all sorts of different environments. They were able to spread to even more environments than the reptiles. Mammals are endothermic and have fur, hair, or blubber for warmth. Mammals can walk, swim, or fly. They can live in nearly all terrestrial environments. Mammals initially filled the forests that covered many early Cenozoic lands. When grasslands arose, mammals evolved to fill those niches too. You can see pictures of many different mammals below (Figure below). 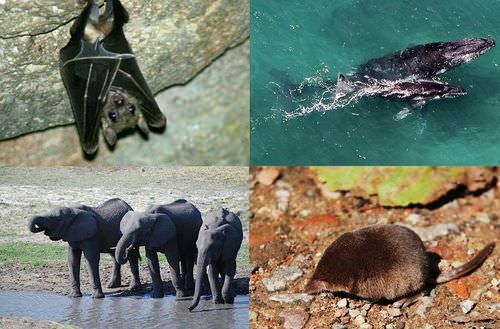 (top left) This bat lives in a cave, emerging at night to find food. (top right) Although you might not guess it, these humpback whales are gigantic, ocean-dwelling mammals. (bottom right) This Eurasian pygmy shrew has found a home on the forest floor. It is only a few inches long. (bottom left) These African elephants are native to central Africa. 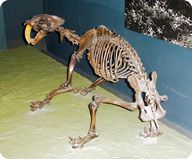 The saber-toothed cat lived during the Pleistocene.

"The Evolution of Life in 60 Seconds" video scales all 4.6 billion years of Earth history into one minute. Don’t blink at the end!

Many of the organisms that made up the Pleistocene megafauna went extinct as conditions warmed. Some may have been driven to extinction by human activities.

Imagine a vast grassy plain covered with herds of elephants, bison, and camels stretching as far as the eye can see. Lions, tigers, wolves, and, later, humans, hunt the herds on their summer migration.This was the San Francisco Bay Area at the close of the last ice age.