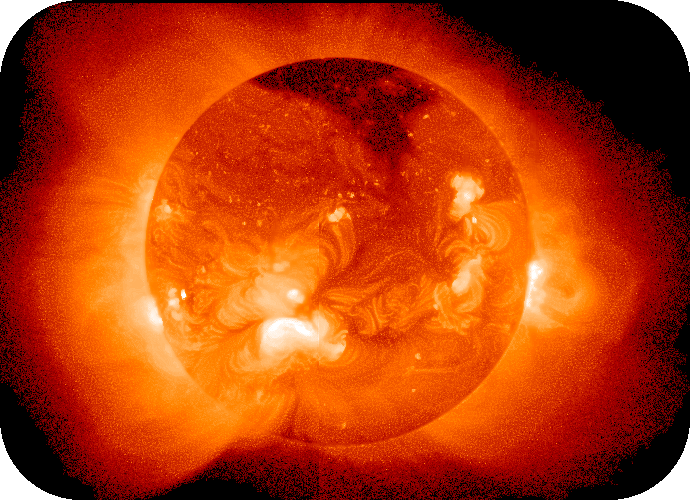 Different instruments pick up different features of the Sun. None can show us the Sun's interior. But studies from the SOHO spacecraft and other craft allow us to study the interior. We know a surprising amount about a body that is so hot and so far away.

Layers of the Sun

The Sun is made almost entirely of the elements hydrogen and helium. The Sun has no solid material. Most atoms in the Sun exist as plasma. Plasma is superheated gas with an electrical charge. Because the Sun is made of gases, it does not have a defined outer boundary. Like Earth, the Sun has an internal structure. The inner three layers make up what we would actually call “the Sun.”

Because the Sun is not solid, it does not have a defined outer boundary. It does, however, have a definite internal structure with identifiable layers (Figure below). Since the layers are not solid, the boundaries are fuzzy and indistinct. From inward to outward, the layers are: the core, the radiative zone, and the convection zone. 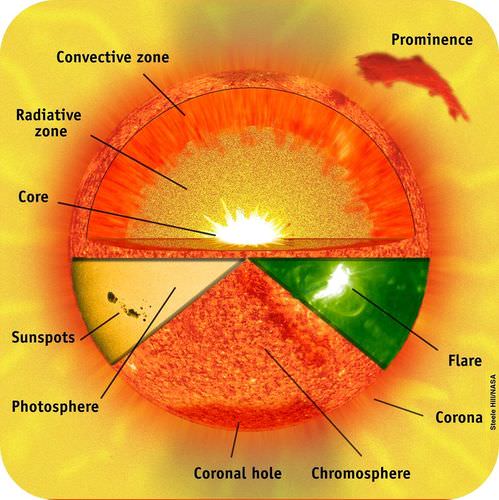 The layers of the Sun.

The core is the Sun's innermost layer. The core is plasma. It has a temperature of around 15 million degrees Celsius (°C). Nuclear fusion reactions create the immense temperature. In these reactions, hydrogen atoms fuse to form helium. This releases vast amounts of energy. The energy moves toward the outer layers of the Sun. Energy from the Sun's core powers most of the solar system.