Can humans take a field trip through the solar system?

A field trip through the solar system would take a long time. It took 12 years for the Voyager spacecraft to get from Earth to Neptune. If a human was on board, he or she would probably want to come back! Fortunately, unmanned spacecraft can send back images of far distant places in the solar system. 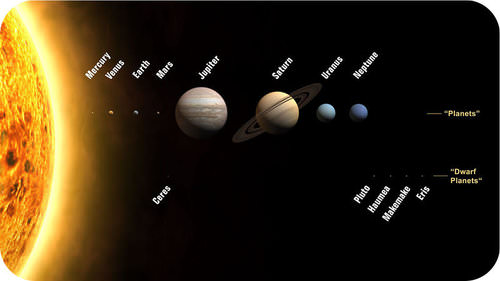 Relative sizes of the Sun, planets, and dwarf planets and their positions relative to each other are to scale. The relative distances are not to scale.

The Sun is just an average star compared to other stars. But it is by far the largest object in the solar system. The Sun is more than 500 times the mass of everything else in the solar system combined! Listed below is data on the sizes of the Sun and planets relative to Earth (Table below).

Distances in the Solar System

Distances in the solar system are often measured in astronomical units (AU). One astronomical unit is defined as the distance from Earth to the Sun. 1 AU equals about 150 million km (93 million miles). Listed below is the distance from the Sun to each planet in AU (Table below). The table shows how long it takes each planet to spin once on its axis. It also shows how long it takes each planet to complete an orbit. Notice how slowly Venus rotates! A day on Venus is actually longer than a year on Venus!

The Size and Shape of Orbits

The relative sizes of the orbits of planets in the solar system. The inner solar system and asteroid belt is on the upper left. The upper right shows the outer planets and the Kuiper belt.