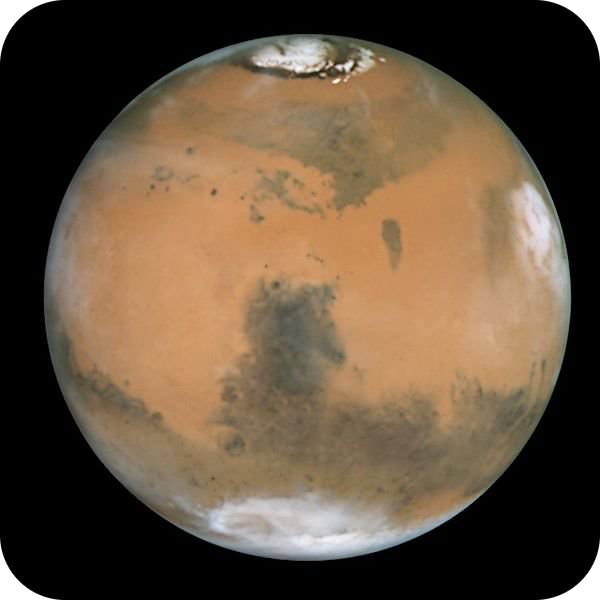 How do we get such incredible views of other planets?

Mars is close, and it's not obscured by its atmosphere like Venus is. The Hubble Space Telescope took this incredible photo of Mars. This is a true color photo; the red is soil, the white is the polar ice cap, the dark is basalt. Mars has many features like Earth's, but Mars is missing one very important feature: an ocean.

Mars is the fourth planet from the Sun. The Red Planet is the first planet beyond Earth’s orbit.

Mars’ atmosphere is thin compared to Earth's. This means that there is much lower pressure at the surface. Mars's greenhouse effect is also weak, so temperatures are only slightly higher than they would be if the planet did not have an atmosphere. The Martian climate is most like Earth's of any planet in the solar system.

Mars is the easiest planet to observe. As a result, it has been studied more than any other planet besides Earth. People can stand on Earth and observe the planet through a telescope. We have also sent many space probes to Mars. A car-sized robotic rover, Curiosity, arrived on the Red Planet in August 2012. Curiosity joins Opportunity, which has been active since 2004.

No humans have ever set foot on Mars. NASA and the European Space Agency have plans to send people to Mars. The goal is to do it sometime between 2030 and 2040. The expense and danger of these missions are phenomenal.

Mars has mountains, canyons, and other features similar to Earth. But it doesn’t have as much geological activity as Earth. There is no evidence of plate tectonics on Mars. There are also more craters on Mars than on Earth. But there are fewer craters than on the Moon. What does this suggest to you regarding Mars' tectonic history? Pictured below is an image of the Martian surface (Figure below).

Viewed from Earth, Mars is red. This is due to large amounts of iron in the soil. The ancient Greeks and Romans named the planet Mars after the god of war because the planet's red color reminded them of blood. Mars has only a very thin atmosphere made up mostly of carbon dioxide.

Mars is home to the largest volcano in the solar system: Olympus Mons (Figure below). Olympus Mons is a shield volcano. The volcano is similar to the volcanoes of the Hawaiian Islands. But Olympus Mons is a giant, about 27 km (16.8 miles; 88,580 ft) tall. That's three times taller than Mount Everest! At its base, Olympus Mons is about the size of the entire state of Arizona, about 624 km (374 miles) across. 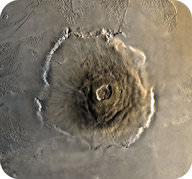 The largest volcano in the solar system, Olympus Mons.

The largest canyon in the solar system, Valles Marineris

Is There Water on Mars?

Water on Mars has been a fascinating topic in recent years. Scientists had thought that Mars could not have liquid water because the pressure of the atmosphere is too low. By searching images from orbiters, they have discovered hydrated salts, which indicate the presence of liquid water. They also found dark streaks going down hills that lengthen during summer and fade in winter. The streaks are caused by water that flows downhill in summer and freezes in winter.

The planet has much more solid water than liquid water. The south pole of Mars has a very visible ice cap. Scientists also have evidence that there is also a lot of ice just under the Martian surface. The ice melts when volcanoes erupt. At these times liquid water flows across the surface.

The rover has found evidence of a flowing stream on Mars. Layers of smooth, water-polished pebbles have been photographed. This is exactly what you would see in a stream on Earth. There are many surface features that look like water-eroded canyons. Since there is and was liquid water on Mars, scientists think that life might have existed there in the past. It is possible for very simple lifeforms to exist there now! One of Curiosity's tasks is to sample the soil to search for carbon and other evidence of life.

Mars has two very small, irregular moons, Phobos (Figure below) and Deimos. These moons were discovered in 1877. They are named after the two sons of Ares, who followed their father into war. The moons were probably asteroids that were captured by Martian gravity. 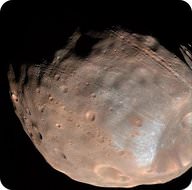