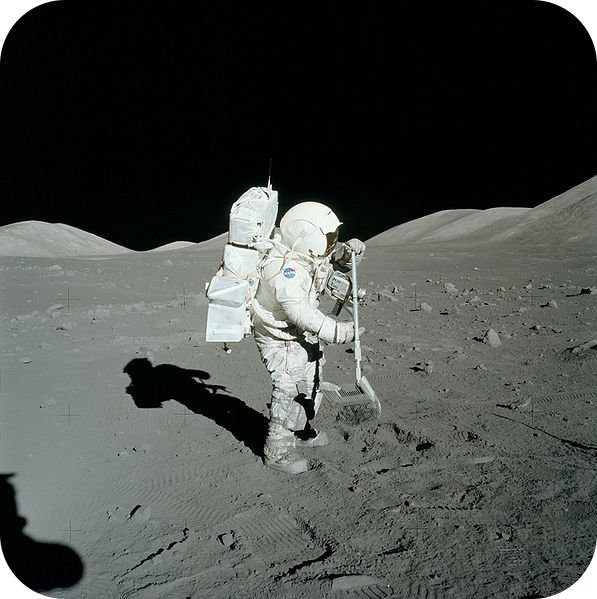 Would you like to go on this field trip?

The most amazing "field trips" in human history took place in the Apollo program. Between 1969 and 1972, six manned spaceships landed on the Moon. Human astronauts walked on the Moon. They brought back soil and rock samples. No human has visited Earth's satellite since 1972. There is talk of someday returning, but there are no concrete plans.

The Moon is Earth’s only natural satellite. The Moon is about one-fourth the size of Earth, 3,476 kilometers in diameter. Gravity on the Moon is only one-sixth as strong as it is on Earth. If you weigh 120 pounds on Earth, you would weigh only 20 pounds on the Moon. You can jump six times as high on the Moon as you can on Earth. The Moon makes no light of its own. Like every other body in the solar system, it only reflects light from the Sun.

We all know what the Moon looks like. It's always looked the same during our lifetime. In fact, the Moon has looked the same to every person who has looked up at it for all time. Even the dinosaurs, trilobites, or cyanobacteria, should they have looked up at it, would have seen more-or-less the same thing. This is not true of Earth. Natural processes continually alter Earth’s surface. Without these processes, would Earth's surface resemble the Moon's? The Moon does have more craters than it did in the long distant past, of course.

Even though we can't see it from Earth, the Moon has changed recently too. Astronauts' footprints are now on the Moon. They will remain unchanged for thousands of years, because there is no wind, rain, or living thing to disturb them. A falling meteorite could destroy them. Tiny micrometeorites bombard the Moon's surface and smooth it over time too.

The surface of the Moon is very different from Earth. The lunar landscape is covered by craters caused by meteoroid impacts (Figure below). (Lunar means relating to the Moon.) The craters are bowl-shaped basins on the Moon’s surface. Because the Moon has no water, wind, or weather, the craters remain unchanged. 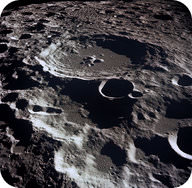 Craters, like the one shown in this image, are found on the surface of the Moon.

When you look at the Moon from Earth, you notice dark and light areas. The maria are dark, solid, flat areas of lava (mostly basalt). Maria cover around 16% of the Moon’s surface, mostly on the near side. The maria formed about 3.0 to 4.0 billion years ago, when the Moon was continually bombarded by meteoroids (Figure below). Large meteorites broke through the Moon’s newly formed surface. This eventually caused magma to flow out and fill the craters. Scientists estimate volcanic activity on the Moon ended about 1.2 billion years ago. 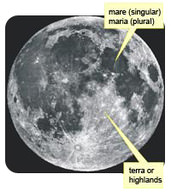 Maria (the dark areas) and terrae (the light areas) cover the Moon.

The lighter parts on the Moon are called terrae, or highlands (Figure above). They are higher than the maria and include several high mountain ranges. The rock that makes up the highlands is composed mostly of feldspar, which is lighter in color and crystallized more slowly than the maria. The rock looks light because it reflects more of the Sun’s light.

The figure below shows the near and far sides of the Moon (Figure below). They are different! 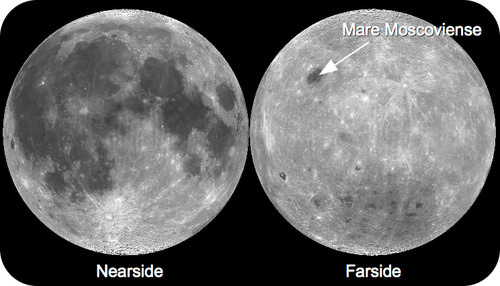 The Mare Moscoviense is one of the few maria, or dark, flat areas, on the far side.

The rocks of the terrae formed while the lunar magma ocean cooled just after the Moon formed. The maria formed later.

There are no lakes, rivers, or even small puddles anywhere to be found on the Moon's surface. There is no running water and no atmosphere. This means that there is no erosion. Natural processes continually alter Earth’s surface. Without these processes, our planet’s surface would be covered with meteorite craters just like the Moon. Many moons in our solar system have cratered surfaces.

NASA scientists have discovered a large number of water molecules mixed in with lunar dirt. There is also surface water ice in some of the frigid places that are always in shadow. Even though there is a very small amount of water, there is no atmosphere. Temperatures are extreme. So it comes as no surprise that there has not been evidence of life on the Moon.

Like Earth, the Moon has a distinct crust, mantle, and core. The crust is composed of igneous rock. This rock is rich in the elements oxygen, silicon, magnesium, and aluminum. On the near side, the Moon’s crust is about 30 kilometers thick. On the far side, the crust is about 100 kilometers thick. The mantle is made of rock like Earth’s upper mantle. The Moon has a small metallic core, perhaps 300 to 500 kilometers in diameter. The composition of the core is probably mostly iron with some sulfur and nickel. We learned this both from the rock samples gathered by astronauts and from spacecraft sent to the Moon.

Humans have walked on only two planetary bodies: Earth and the Moon. The footprints the men left behind are the first signs of life ever on the Moon. Scientists learned a great deal about the Moon from the Apollo missions. The samples that were brought back have been studied in laboratories. We know an incredible amount about the Moon because of these samples. Having these rocks radically changed our thinking about the Moon.

The Moon is easily seen from Earth. Early astronomers used telescopes to study and map its surface. The Moon has also seen a great number of satellites, rovers, and orbiters. After all, it is now relatively easy to get spacecraft to the satellite. Also, before humans could be safely sent to the Moon, many studies and experiments had to be completed.