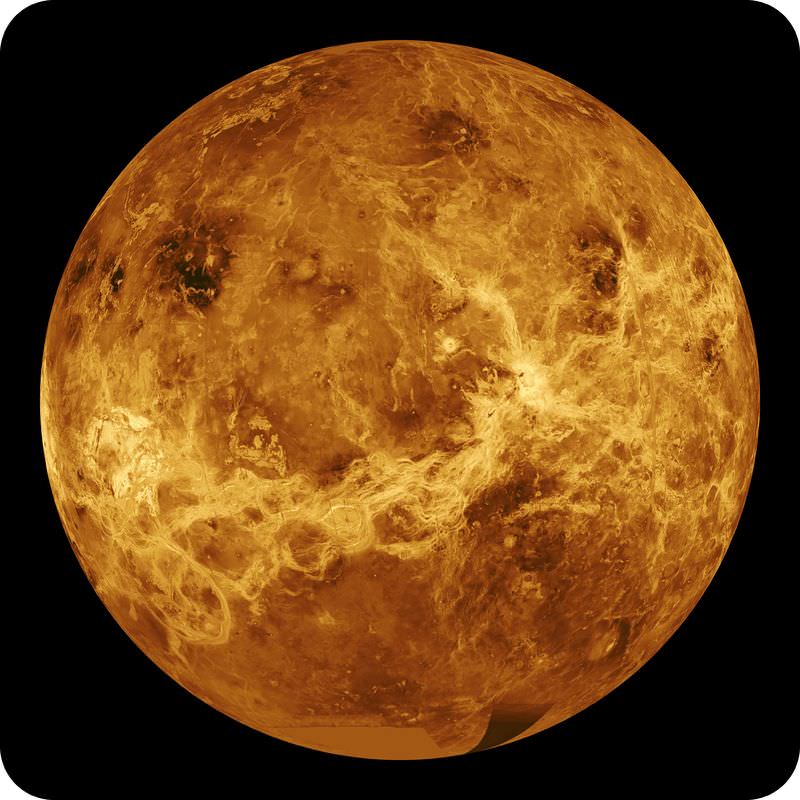 This image was produced by the Magellan probe on a flyby. Radar waves sent by the spacecraft reveal mountains, valleys, vast lava plains, and canyons. The colors are not real. They enhance the features so we can better see them.

Named after the Roman goddess of love, Venus is the only planet named after a female. Venus is sometimes called Earth’s “sister planet.” Venus is our nearest neighbor and is most like Earth in size. But Venus is a lot different from Earth. Earth's life would not find the planet very hospitable at all.

Viewed through a telescope, Venus looks smooth and featureless. The planet is covered by a thick layer of clouds. You can see the clouds in pictures of Venus (Figure below). 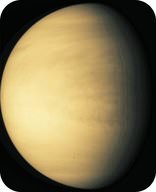 Venus in real color. The planet is covered by a thick layer of clouds.

We make maps of the surface using radar because the thick clouds won’t allow us to take photographs of the surface of Venus. This is shown in the first image at the top.

Clouds on Earth are made of water vapor. Venus's clouds are a lot less pleasant. They are made of carbon dioxide, sulfur dioxide, and large amounts of corrosive sulfuric acid! Scientists think the color of sunlight on Venus is reddish-brown.

The atmosphere of Venus is so thick that the pressure on the surface of Venus is very high. In fact, it is 90 times greater than the pressure at Earth’s surface! The thick atmosphere causes a strong greenhouse effect. As a result, Venus is the hottest planet. Even though it is farther from the Sun, Venus is even much hotter than Mercury. Temperatures at the surface reach 465°C (860°F). That’s hot enough to melt lead!

The surface of Venus is shrouded by thick clouds. Radar images show a complex surface. There are volcanoes and craters like those found on other planets and moons. The surface is not nearly as complex as the surface of Earth.

There are a large number of craters on Venus. However, there are not nearly as many as on Mercury or the Moon. So the planet's surface must be fairly young. This suggests that the planet experiences volcanism and has a hot interior.

Venus has more volcanoes than any other planet. There are between 100,000 and one million volcanoes on Venus! Most of the volcanoes are now inactive.

Pictured below is an image made using radar data (Figure below). The volcano is Maat Mons. Lava beds are in the foreground. 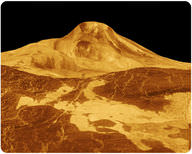 Radar image of the Maat Mons volcano on Venus with lava beds in the foreground.

Venus is the only planet that rotates clockwise as viewed from its North Pole. All of the other planets rotate counterclockwise. Venus turns slowly, making only one turn every 243 days. This is longer than a year on Venus! It takes Venus only 225 days to orbit the Sun.

Because the orbit of Venus is inside Earth’s orbit, Venus always appears close to the Sun. You can see Venus rising early in the morning, just before the Sun rises (Figure below). For this reason, Venus is sometimes called “the morning star.” When it sets in the evening, just after the Sun sets, it may be called “the evening star.” Since planets only reflect the Sun’s light, Venus should not be called a star at all! Venus is very bright because its clouds reflect sunlight very well. Venus is the brightest object in the sky besides the Sun and the Moon. 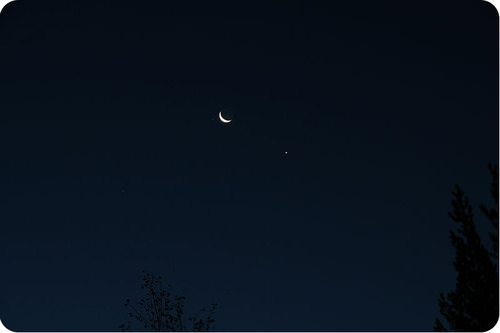 Venus (right) and the Moon (left) just before sunrise.

Like Mercury, but unlike Earth, Venus does not have a moon.