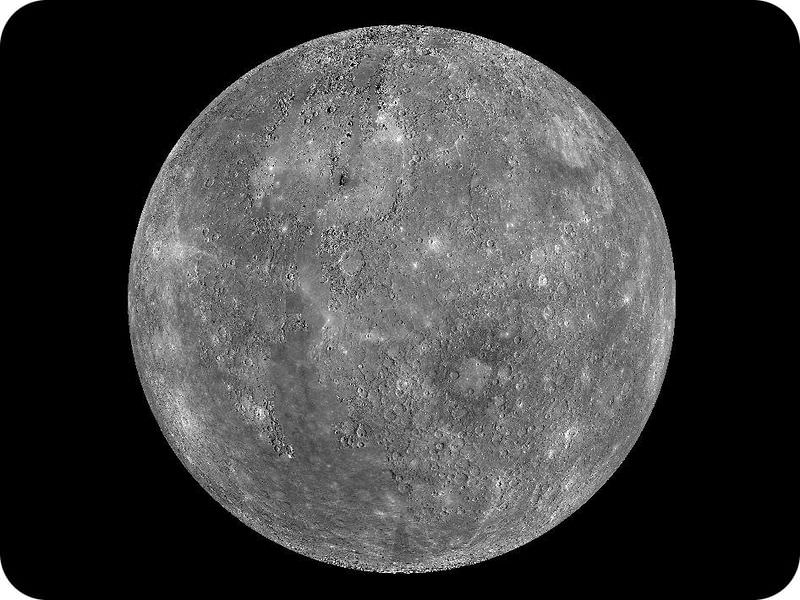 Mercury looks a lot like Earth's Moon. Why do you think it does? Both have been struck by a lot of asteroids. Both have no atmosphere, so there is little weathering and erosion. If they had an atmosphere, many of the craters would have been eroded away. Both have no plate tectonics to transform the landscape. This would also remove a lot of craters.

Mercury is the smallest planet. It has no moon. It is also the planet closest to the Sun. Pictured below is the surface of Mercury covered with craters (Figure below), like Earth’s Moon. Many of the impact craters are billions of years old. This means that Mercury hasn’t changed much geologically for billions of years. It has no plate tectonics. With only a trace of an atmosphere, it has no weather to wear down the ancient craters.

The surface of Mercury is covered with craters, like Earth’s Moon.

Because Mercury is so close to the Sun, it is difficult to observe from Earth, even with a telescope. The Mariner 10 spacecraft did a flyby of Mercury in 1974–1975. In 2004, the MESSENGER mission left Earth. On its way to Mercury, it did one flyby of Earth, two of Venus, and three of Mercury. In March 2011, MESSENGER became the first spacecraft to enter an orbit around Mercury. To date, MESSENGER has taken over 100,000 images and has revealed many interesting features of the planet's interior.

Mercury is named for the Roman messenger god. Mercury was a messenger because he could run extremely fast. The Greeks gave the planet this name because Mercury moves very quickly in its orbit around the Sun. Mercury orbits the Sun in just 88 Earth days. Mercury has a very short year, but it also has very long days. Mercury rotates slowly on its axis, turning exactly three times for every two times it orbits the Sun. Therefore, each day on Mercury is 58 Earth days long.

Mercury is very close to the Sun, so it can get very hot. Mercury also has virtually no atmosphere. Since the planet rotates very slowly, the temperature varies tremendously. In direct sunlight, the surface can be as hot as 427°C (801°F). On the dark side, the surface can be as cold as –183°C (–297°F)! The coldest temperatures may be on the insides of craters. Most of Mercury is extremely dry. Scientists think that there may be a small amount of water, in the form of ice, at the planet's poles. The poles never receive direct sunlight.

Pictured below is a diagram of Mercury's interior (Figure below). Mercury is one of the densest planets. Scientists think that the interior contains a large core made mostly of melted iron. The inner core may be solid, however. Mercury's core takes up about 85% of the planet's radius. 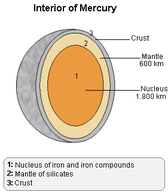 Mercury is one of the most dense planets, with a very large core.