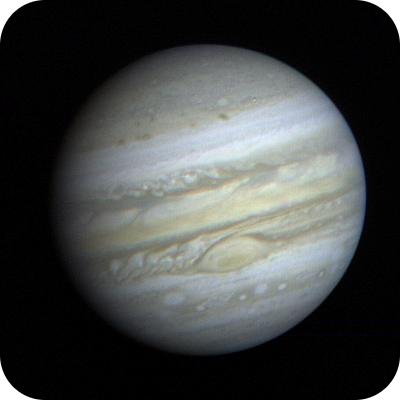 What are Jupiter's most distinctive features?

Jupiter has been studied well for being so far away. Many flybys, one orbiter, and a probe have all visited the planet. While the possibility exists for humans to reach Mars, a manned trip to Jupiter seems a long ways away. The round trip would take at least 10 years. Who would want to spend more than a decade on a spaceship? At least they could see the Great Red Spot and other features in person!

Jupiter is truly a giant! The planet has 318 times the mass of Earth, and over 1,300 times Earth’s volume. So Jupiter is much less dense than Earth. Because Jupiter is so large, it reflects a lot of sunlight. When it is visible, it is the brightest object in the night sky besides the Moon and Venus. Jupiter is quite far from Earth. The planet is more than five times as far from Earth as the Sun. It takes Jupiter about 12 Earth years to orbit once around the Sun.

A Ball of Gas and Liquid

Since Jupiter is a gas giant, could a spacecraft land on its surface? The answer is no. There is no solid surface at all! Jupiter is made mostly of hydrogen, with some helium, and small amounts of other elements. The outer layers of the planet are gas. Deeper within the planet, the intense pressure condenses the gases into a liquid. Jupiter may have a small rocky core at its center.

Jupiter's atmosphere is unlike any other in the solar system! The upper layer contains clouds of ammonia. The ammonia is different colored bands. These bands rotate around the planet. The ammonia also swirls around in tremendous storms. The Great Red Spot (Figure below) is Jupiter's most noticeable feature. The spot is an enormous, oval-shaped storm. It is more than three times as wide as Earth! Clouds in the storm rotate counterclockwise. They make one complete turn every six days or so. The Great Red Spot has been on Jupiter for at least 300 years. It may have been observed as early as 1664. It is possible that this storm is a permanent feature on Jupiter. No one knows for sure. 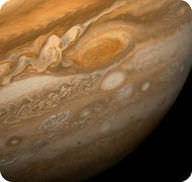 The Great Red Spot has been on Jupiter since we've had telescopes powerful enough to see it.

Jupiter has lots of moons. As of 2012, we have discovered over 66 natural satellites of Jupiter. Four are big enough and bright enough to be seen from Earth using a pair of binoculars. These four moons were first discovered by Galileo in 1610. They are called the Galilean moons. The figure below shows the four Galilean moons and their sizes relative to each other (Figure below). These moons are named Io, Europa, Ganymede, and Callisto. The Galilean moons are larger than even the biggest dwarf planets, Pluto and Eris. Ganymede is the biggest moon in the solar system. It is even larger than the planet Mercury!

The Galilean moons are as large as small planets.

Scientists think that Europa is a good place to look for extraterrestrial life. Europa is the smallest of the Galilean moons. The moon's surface is a smooth layer of ice. Scientists think that the ice may sit on top of an ocean of liquid water. How could Europa have liquid water when it is so far from the Sun? Europa is heated by Jupiter. Jupiter's tidal forces are so great that they stretch and squash its moon. This could produce enough heat for there to be liquid water. Numerous missions have been planned to explore Europa, including plans to drill through the ice and send a probe into the ocean. However, no such mission has yet been attempted.

Photos from the Voyager missions showed that Jupiter has a ring system. This ring system is very faint, so it is very difficult to observe from Earth.

Jupiter has fascinated scientists at least since Galileo turned his first telescope on the planet. In 1979, two spacecrafts, Voyager 1 and Voyager 2, visited Jupiter and its moons. The Galileo orbiter orbited the planet for seven years and flew by all of the Galilean moons plus one other moon. The orbiter released a probe to study the planet's atmosphere. Missions to Jupiter are presently underway. Juno arrived in late 2016.