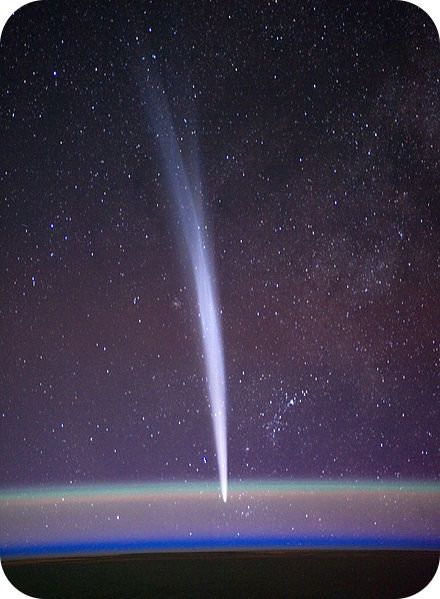 Is this comet going to hit?

Astronauts on board the International Space Station witness incredible things. This photo of Comet Lovejoy was taken in December 2011. Although it looks like its going to strike Earth, it was not even visible from our planet by the naked eye. The comet is now traveling far out into space.

Comets are small, icy objects that have very elliptical orbits around the Sun. Their orbits carry them from the outer solar system to the inner solar system, close to the Sun. Early in Earth’s history, comets may have brought water and other substances to Earth during collisions.

Comet tails form as the comet flies close to the Sun and the outer layers of ice melt and form a glowing coma. Particles streaming from the Sun push this gas and dust into a long tail. The tail always points away from the Sun. The coma is bright because it reflects light from the Sun (Figure below). Comets appear for only a short time when they are near the Sun. They seem to disappear as they move back to the outer solar system. 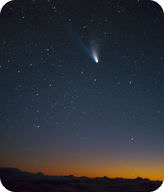 Comet Hale-Bopp, also called the Great Comet of 1997. The comet has two visible tails: a bright, curved dust tail and a fainter, straight tail of ions (charged atoms) pointing directly away from the Sun.

The time between one appearance of a comet and the next is called the comet’s period. Halley’s comet, with a period of 75 years, will be seen next in 2061. The first mention of the comet in historical records may go back as much as two millennia.

Where Comets Come From

Short-period comets have periods of about 200 years or less. These comets come from a region beyond the orbit of Neptune called the Kuiper belt (pronounced “KI-per”). The Kuiper belt also contains asteroids and at least two dwarf planets.