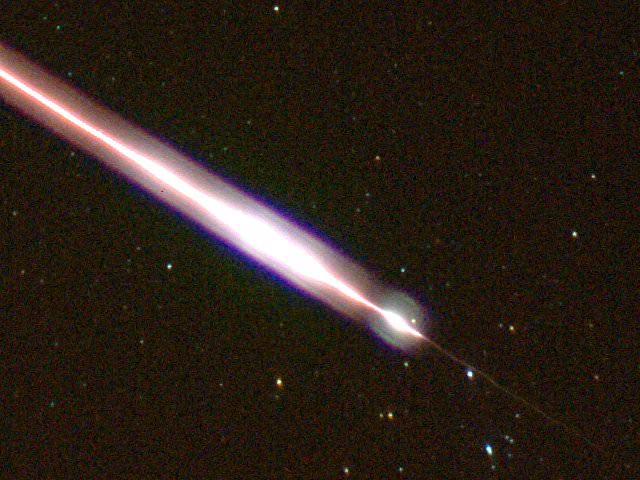 Is this a comet?

When a meteor shoots through the atmosphere, it burns and glows. When we look up and see one, we call it a shooting star. In this image, the meteor looks like a comet. No need to go anywhere to see this. Just try to catch one of these meteor showers: the Perseids in mid-August or the Geminids in mid-December. Look for information on the dates and whether the Moon will not be lighting up the sky.

If you look at the sky on a dark night, you may see a meteor (Figure below). A meteor forms a streak of light across the sky. People call them shooting stars because that's what they look like. But meteors are not stars at all. The light you see comes from a small piece of matter burning up as it flies through Earth's atmosphere.

Meteors burning up as they fall through Earth's atmosphere.

Before these small pieces of matter enter Earth’s atmosphere, they are called meteoroids. Meteoroids are as large as boulders or as small as tiny sand grains. Larger objects are called asteroids; smaller objects are interplanetary dust. Meteoroids sometimes cluster together in long trails. They are the debris left behind by comets. When Earth passes through a comet trail, there is a meteor shower. During a meteor shower, there are many more meteors than normal for a night or two.

Meteorites provide clues about our solar system. Many were formed in the early solar system (Figure below). Some are from asteroids that have split apart. A few are rocks from nearby bodies like Mars. For this to happen, an asteroid would have to have smashed into Mars and sent up debris. A bit of the debris would have to then enter Earth’s atmosphere as a meteor. 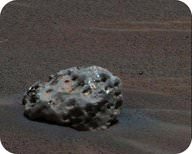 The Mars Rover, Opportunity, found a metal meteorite on the Red Planet.