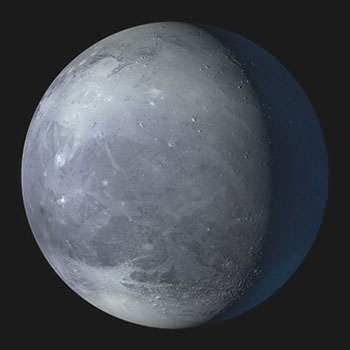 What is, and what is not, a planet?

Pluto just didn't fit the criteria for a planet, so it was placed in a new category with others of its kind, dwarf planets. So what is a planet, and what is Pluto?

What is a Planet?

In 2006, the International Astronomical Union decided that there were too many questions surrounding what could be called a planet and so refined the definition of a planet.

According to the new definition, a planet must:

So dwarf planets are like planets except for one thing. They have not cleared their orbits of smaller objects. They do not have enough gravity to do this. There are five recognized dwarf planets in the solar system: Ceres, Pluto, Makemake, Haumea, and Eris.

From the time it was discovered in 1930 until the early 2000s, Pluto was considered the ninth planet. When astronomers first located Pluto, the telescopes were not as good. Pluto and its moon, Charon, were seen as one much larger object (Figure below). With better telescopes, astronomers realized that Pluto was much smaller than they had thought. 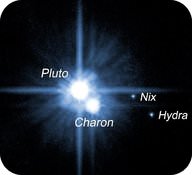 Pluto and its moon, Charon, are actually two objects.

Better technology also allowed astronomers to discover many smaller objects like Pluto that orbit the Sun. One of them, Eris, discovered in 2005, is even larger than Pluto.

Pluto is different in other ways. The outer planets are all gas giants. Pluto is small, icy, and rocky. Pluto has a diameter of about 2,400 km. It has only about one-fifth the mass of Earth’s Moon. Pluto’s orbit is tilted relative to the other planets. It's orbit is shaped like a long, narrow ellipse. Pluto’s orbit sometimes even passes inside Neptune’s orbit.

Pluto’s orbit is in the Kuiper belt. With more than 200 million Kuiper belt objects in its path, Pluto has failed the test of clearing other bodies out of its orbit.

From what you’ve read above, do you think Pluto should be called a planet? Why are people hesitant to take away Pluto’s planetary status? Is Pluto a dwarf planet?

Pluto has three moons of its own. The largest, Charon, is big compared to Pluto. The Pluto-Charon system is sometimes called a double dwarf planet (Figure above). Two smaller moons, Nix and Hydra, were discovered in 2005.

Pluto and the other dwarf planets, besides Ceres, are found orbiting out beyond Neptune.

Ceres (Figure below) is a rocky body that orbits the Sun. It could be an asteroid or a planet. Before 2006, Ceres was thought to be the largest asteroid. Is it an asteroid? Ceres is in the asteroid belt. But it is by far the largest object in the belt. Ceres has such high gravity that it is spherical.

Is Ceres a planet? Ceres has only about 1.3% of the mass of the Earth’s Moon. Its orbit is full of other smaller bodies. Its gravity was not high enough to clear its orbit. Ceres fails the fourth criterion for being a planet. Ceres is now considered a dwarf planet, the closest to the Sun.

Ceres is a large spherical object in the asteroid belt.

Haumea was named a dwarf planet in 2008. It is an unusual dwarf planet. The body is shaped like an oval! Haumea's longest axis is about the same as Pluto's diameter. Its shortest axis is about half as long. The body's orbit is tilted 28 degrees. Haumea is so far from the Sun that it takes 283 years to make one orbit (Figure below). 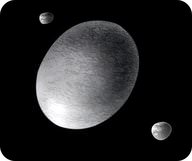 An artist’s drawing of what Haumea and its moons might look like. The moons are drawn closer to Haumea than their actual orbits.

Haumea is the third-brightest Kuiper belt object. Haumea has two moons. Haumea's odd oval shape is probably caused by its extremely rapid rotation. It rotates in just less than 4 hours! Like other Kuiper belt objects, Haumea is covered by ice. Its density is similar to Earth’s Moon, at 2.6 – 3.3 g/cm3. This means that most of Haumea is rocky.

Haumea is part of a collisional family. This is a group of astronomical objects that formed from an impact. This family has Haumea, its two moons, and five more objects. All of these objects are thought to have formed from a collision very early in the formation of the solar system.

Makemake is the third-largest and second-brightest dwarf planet we have discovered so far (Figure below). Makemake is only 75 percent the size of Pluto. Its diameter is between 1300 and 1900 kilometers. The name comes from the mythology of the Easter Islanders. Makemake was the god that created humanity. At a distance between 38.5 to 53 AU, this dwarf planet orbits the Sun in 310 years. Makemake is made of methane, ethane, and nitrogen ices. 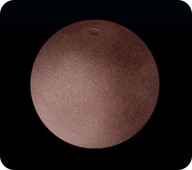 Makemake is a dwarf planet.

Eris is the largest known dwarf planet in the solar system. It is 27 percent larger than Pluto.

Eris is the largest known dwarf planet, but it's so far from the Sun that it wasn't discovered until 2005.

Like Pluto and Makemake, Eris is in the Kuiper belt. But Eris is about three times farther from the Sun than Pluto. Because of its distance, Eris was not discovered until 2005. Early on, it was thought that Eris might be the tenth planet. Its discovery helped astronomers realize that they needed a new definition of “planet.” Eris has a small moon that orbits Eris once about every 16 days.

Astronomers know there may be other dwarf planets far out in the solar system. Look for Quaoar, Varuna, and Orcus to possibly be added to the list of dwarf planets in the future. We still have a lot to discover and explore!