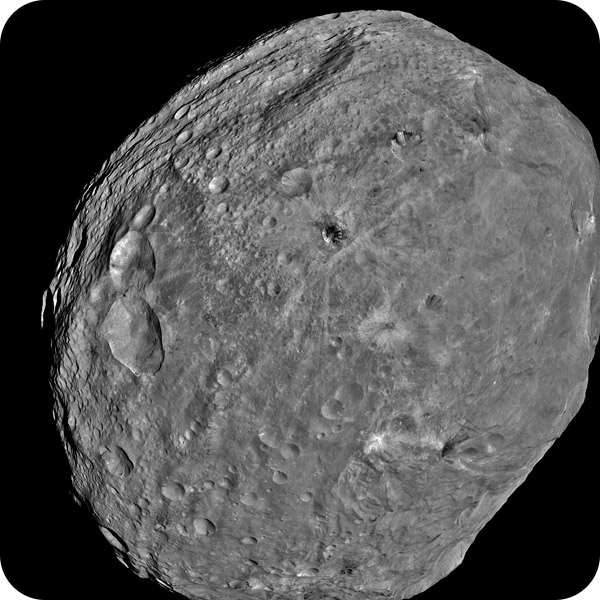 Is this rock an asteroid?

This rock is somewhat round. It is called asteroid Vesta, but it may actually be a protoplanet: too round to be an asteroid, not round enough to be a dwarf planet. This image of Vesta was taken as a spacecraft orbited around it for a year. Scientists are interested in asteroids for many reasons. They are remnants from the early solar system. Asteroids have caused mass extinctions.

After the Sun and planets formed, there was some material left over. These small chunks didn't get close enough to a large body to be pulled in by its gravity. They now inhabit the solar system as asteroids and comets.

Asteroids (Figure below) are very small, irregularly shaped, rocky bodies. Asteroids orbit the Sun, but they are more like giant rocks than planets. Since they are small, they have features that are different from planets. Asteroids do not have enough gravity to become round. They are too small to have an atmosphere. With no internal heat, they are not geologically active.

An asteroid can only change due to a collision. A collision may cause the asteroid to break up. It may create craters on the asteroid’s surface. An asteroid may strike a planet if it comes near enough to be pulled in by its gravity.

Asteroid Ida with its tiny moon Dactyl. The asteroid’s mean radius is 15.7 km.

Hundreds of thousands of asteroids have been found in our solar system. They are still being discovered at a rate of about 5,000 new asteroids per month! The majority are located in between the orbits of Mars and Jupiter. This region is called the asteroid belt (Figure below). There are many thousands of asteroids in the asteroid belt. Still, their total mass adds up to only about four percent of Earth’s Moon.

Asteroids formed at the same time as the rest of the solar system. Although there are many in the asteroid belt, they were never able to form into a planet. Jupiter's gravity kept them apart. 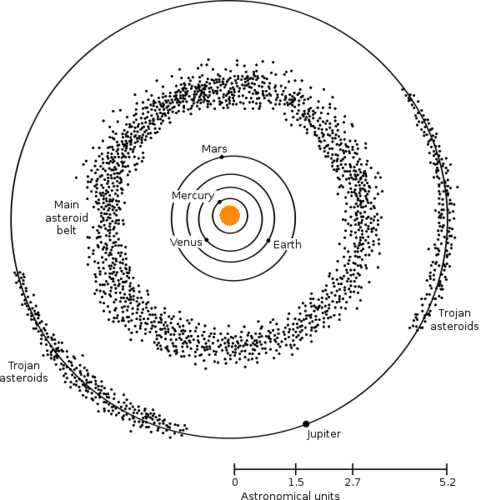 The asteroid belt is between Mars and Jupiter.

Scientists are very interested in asteroids. Most are composed of material that has not changed since early in the solar system. Scientists can learn a lot from them about how the solar system formed. Asteroids may be important for space travel. They could be mined for rare minerals or for construction projects in space.

Scientists have sent spacecrafts to study asteroids. In 1997, the NEAR Shoemaker probe orbited the asteroid 433 Eros. The craft finally landed on its surface in 2001. The Japanese Hayabusa probe returned to Earth with samples of a small near-Earth asteroid in 2010. The U.S. Dawn mission spent a year in orbit around Vesta ending in August 2012.

Thousands of objects, including comets and asteroids, are zooming around our solar system; some could be on a collision course with Earth. QUEST explores how these Near Earth Objects are being tracked and what scientists are saying should be done to prevent a deadly impact.

1. What caused the dinosaurs to go extinct?

3. What are small asteroids called?

4. What steps are taken by NASA to detect asteroids?