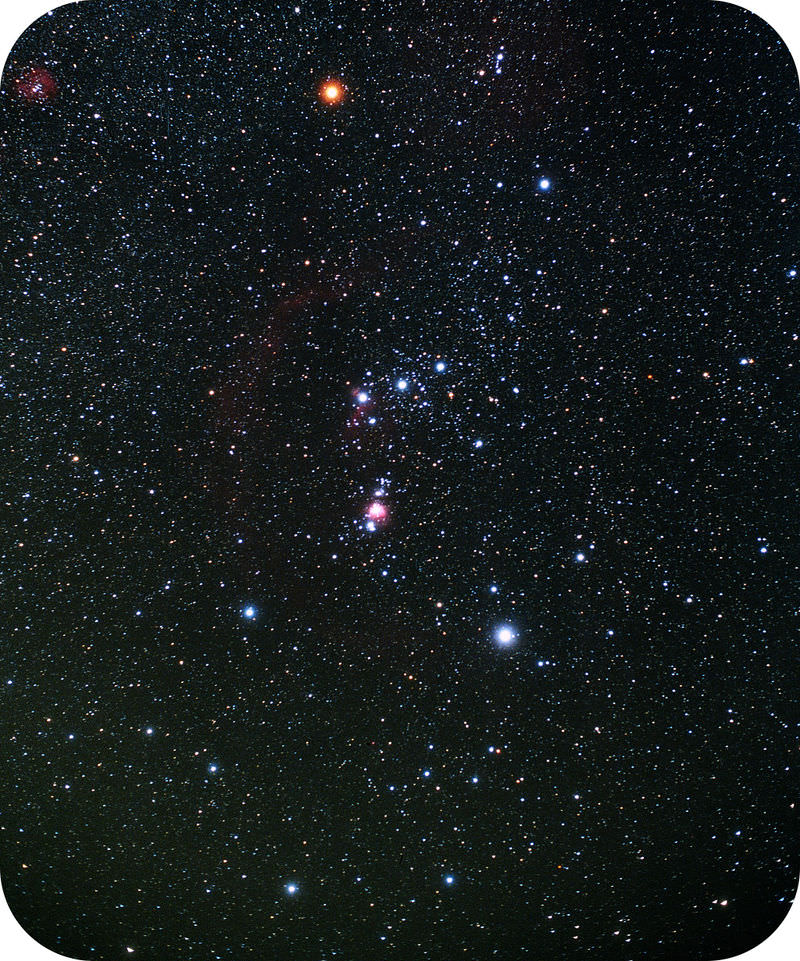 Why are the stars in the Orion constellation different colors?

In this view of Orion you can see that the stars are different colors. The red star in the upper left is Betelgeuse (pronounced BET-ul-juice). The blue star in the lower right is Rigel. The fuzzy patch in the sword is the Orion nebula. The nebula will be discussed in the concept "Star Formation."

With a quick look, stars look the same. Look closer, though, and you can see differences. The most obvious differences are in size and color.

Think about the coil of an electric stove as it heats up. The coil changes in color as its temperature rises. When you first turn on the heat, the coil looks black. The air a few inches above the coil begins to feel warm. As the coil gets hotter, it starts to glow a dull red. As it gets even hotter, it becomes a brighter red. Next it turns orange. If it gets extremely hot, it might look yellow-white, or even blue-white. Like a coil on a stove, a star’s color is determined by the temperature of the star’s surface. Relatively cool stars are red. Warmer stars are orange or yellow. Extremely hot stars are blue or blue-white.

Star temperatures are measured in degrees kelvin. The lowest temperature on the kelvin scale is absolute zero. That means molecules have no motion. Kelvin is related to Celsius and Fahrenheit in these ways:

A graph of the brightness (absolute magnitude) of stars versus their color (temperature) is pictured below (Figure below). This is called Hertzsprung-Russell diagram. 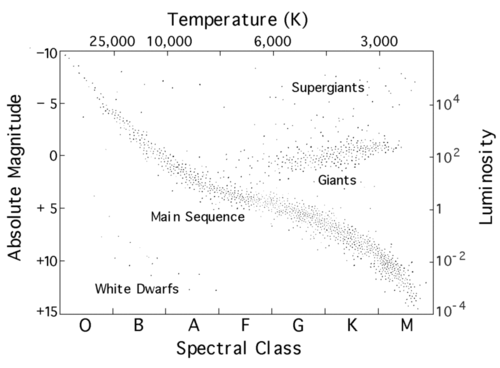 The Hertzsprung-Russell diagram plots luminosity (absolute magnitude) against the color of the stars ranging from the high-temperature blue-white stars on the left side of the diagram to the low temperature red stars on the right side. 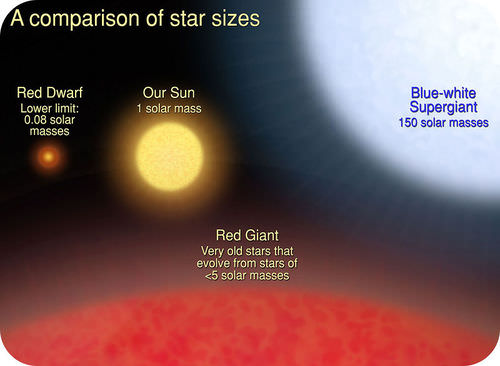 This illustration (Figure above) shows the relative sizes of stars and their mass compared to the Sun. Red dwarfs are less massive and much smaller in size than the Sun. This means they have a very long lifetime. Our Sun is a fairly common type of star and has an average lifespan. Red giants are what some main sequence stars (like our Sun) become near the end of their lives. They are much larger than our Sun. Supergiants are very massive stars and are larger than our Sun, but have a smaller radius than red giants. Supergiants have very short lifetimes.