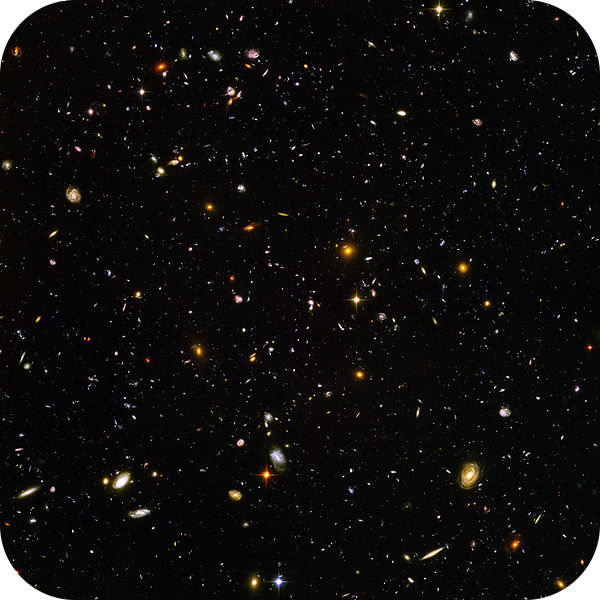 What's at the edge of the Universe?

This image is of the farthest away objects in the Universe. It was taken by the Hubble Space Telescope. The image looks back about 13 billion years. The galaxies in this image were all very young. It has taken 13 billion years for their light to reach us.

The study of the Universe is called cosmology. Cosmologists study the structure and changes in the present Universe. The Universe contains all of the star systems, galaxies, gas, and dust. They also study all the matter and energy that exists now, existed in the past, will exist in the future. The Universe includes all of space and time.

Human Understanding of the Universe

What did the ancient Greeks recognize as the Universe? Their Universe had Earth at the center, the Sun, the Moon, five planets, and a sphere to which all the stars were attached. This idea held for many centuries. Galileo and his telescope helped people recognize that Earth is not the center of the Universe. They also found out that there are many more stars than were visible to the naked eye. All of those stars were in the Milky Way Galaxy.

In the early 20th century, an astronomer named Edwin Hubble (Figure below) discovered something amazing. He showed that the Andromeda Nebula was over 2 million light years away. This was many times farther than the farthest distances that had ever been measured. Hubble realized that many of the objects that astronomers called nebulas were not actually clouds of gas. They were collections of millions or billions of stars. We now call these features galaxies. 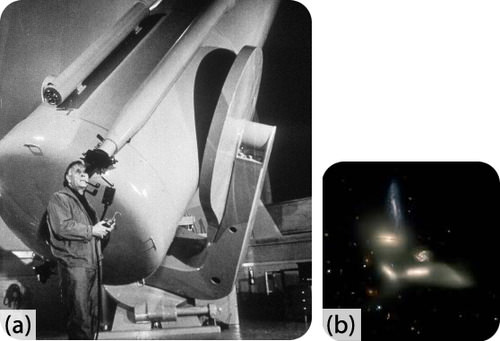 (a) Edwin Hubble used the 100-inch reflecting telescope at the Mount Wilson Observatory in California to show that some distant specks of light were galaxies. (b) Hubble’s namesake space telescope spotted this six galaxy group. Edwin Hubble demonstrated the existence of galaxies.

Hubble showed that the Universe was much larger than our own galaxy. Today, we know that the Universe contains about a hundred billion galaxies. This is about the same number of galaxies as there are stars in the Milky Way Galaxy.